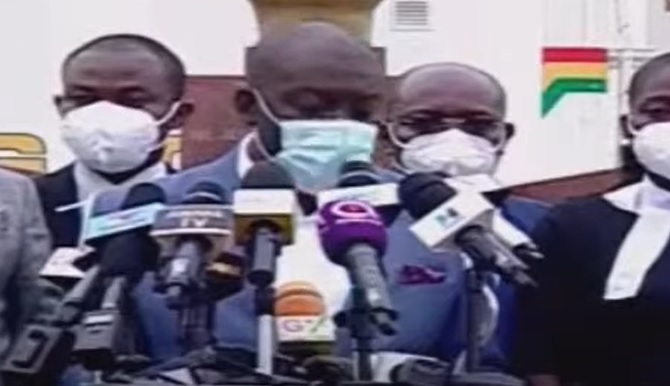 Information Minister-designate Kojo Oppong Nkrumah who is a member of the team of spokespersons for President Akufo-Addo says they are looking forward to the testimony of Rojo Mettle-Nunoo in the ongoing presidential election petition.

Rojo Mettle-Nunoo, the third witness for the petitioner in the election petition case was expected to testify via Zoom due to ill health but the case was adjourned.

Mr Oppong Nkrumah addressing the media after the Supreme Court adjourned hearing on the petition on Friday, said their side is happy to have him testify.

“Ideally you would bring in Rojo and then rather look to get somebody to corroborate assuming his evidence is not enough, they flipped it around, no wahala. But we are happy to have Rojo in the box because there are some questions that would be put to him.

“That is why on the other day we were saying that perhaps they didn’t bring him because they were of the view that if he comes he will perjure himself.

“Now he has come, he has tendered in his witness statement. The technicalities of what must be accepted and what has been dispatched with, now the questions are going to be put to him to see his argument… whether it can stand the test of scrutiny in court,” he added.

Meanwhile, the Court on February 5, 2021, struck out five paragraphs from the witness statement of Rojo Mettle-Nunoo.

The Supreme Court in a unanimous decision struck out paragraphs instead. They include paragraph 4, 5, 6, 7 and 18.

This leaves some 27 paragraphs out of the total 32 submitted by the witness.

The court will resume on Monday, February 8 to listen to the testimony of the third witness of the petitioner. Rojo Mettle-Nunoo was expected to testify on Friday over video link. It remains to be known if he would be available in person by Monday.