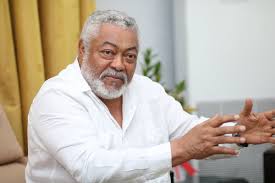 The family of His Excellency Jerry John Rawlings has announced that the funeral for the late former President will be held on December 23 at the Independence Square.

A statement from the family signed by Ambassador James Victor Gbeho, Head of Funeral Planning Committee said: "The family of His Excellency Jerry John Rawlings, has in consultation with the Government, agreed that the date for the State funeral of the former President is confirmed for Wednesday, 23rd December, 2020 at the Independence Square in Accra."

The family is working in conjunction with the Government on the finer details of the funeral ceremony and will communicate the arrangements in due course.

Individuals and institutions who wish to contribute tributes to the memory of Flt Lt Jerry John Rawlings are reminded to email such tributes to [email protected].

Former President of Ghana Jerry John Rawlings passed away after a short illness at the Korle Bu Teaching Hospital in Accra.

Jerry John Rawlings was born on 22 June 1947 is a former Ghanaian military leader and subsequent politician who ruled the country from 1981 to 2001 and also for a brief period in 1979.

Rawlings initially came to power in Ghana as a flight lieutenant of the Ghana Air Force following a coup d’état in 1979. Prior to that, he led an unsuccessful coup attempt against the ruling military government on 15 May 1979, just five weeks before scheduled democratic elections were due to take place.

After two terms in office, the limit according to the Ghanaian Constitution, Rawlings endorsed his vice-president John Atta Mills as presidential candidate in 2000.

Until his death he served as the African Union envoy to Somalia.