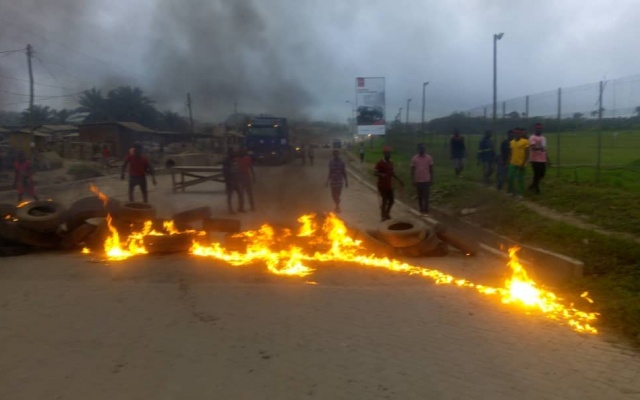 Some residents of Juapong have blocked the main road in the area over the murder of a businessman.

The businessman is said to be shot dead by some suspected armed robbers.

The incident happened on Tuesday at about 11 pm while the deceased and his wife were returning home from work.

About three men reportedly accosted and shot the businessman after the short confrontation. According to eyewitnesses the police delay in responding to the distress calls after the incident.

This angered the residents and forcing them to mount roadblocks and burn car tyres this morning.

READ ALSO :  Murder of 'witch' woman has disfigured the face of our nation - Akufo-Addo

"According to the wife, they were going home around 11 pm and getting close to the house they saw a gentleman coming out of the dark corner on the way. Before the husband could turnaround the attacked him."

"I got the information around 1 am that the man we popularly call him Sonny was gun down when returning home from the shop. What brought about the whole scuffle is that when the incident happened the police did not come until the youth blocked the road," another resident added.

Calm has now been restored to the area after officers from the Juapong Police command visited the place to maintain law and order.