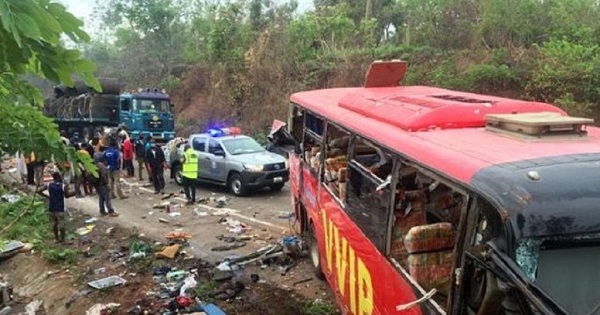 Road accident alone has claimed one thousand five hundred and eight lives in the country between January and September, this year.

This means on the average, six people died every day on the country’s roads as of September 30.

Data from the Motor Traffic and Transport Department (MTTD) of the Ghana Police Service also indicated that 10,197 people were injured in 2019, involving 7, 138 vehicles.

The figures were, however, slightly lower than those of the same period last year when 1,710 people died in 10,051 crashes involving 7,138 vehicles.

The Staff Officer to the Director-General of the MTTD, Ghana Police Service, Supt. Dr Sasu Mensah, released the figures at the 5th Biennial National Safety Conference in Accra yesterday.

Organised by the Bureau of Public Safety (BPS) in collaboration with the Department of Factories Inspectorate, the event provided a platform to discuss occupational safety, security, health and environmental hazards in the country.

This year’s event, which focused on transport, was on the theme: “Transportation Safety and Security: Strengthening Institutions, Research and Training towards a Sustainable Development.”

According to National Road Safety Commission data, casualties of road accidents were between the ages of 18 and 45.
Offences

Taking a look at the offences committed on the roads in the Accra metropolis, Dr Mensah said a number of vehicles checked by a task force between December, 2017 and April, 2018 recorded offences, including drivers driving beyond the legal alcohol limit, drivers not wearing seat belt, driving without licence and using worn-out tyres.

Out of 1,600 vehicles checked during the period, 182 cases were processed for court with 105 convicted.

Dr Mensah said the MTTD undertook a selection exercise where some of the personnel were made to write examination and those who passed were picked for road traffic duties.

He said the police service was determined to ensure the enforcement of the laws on road traffic to help prevent accidents.

“Mass media linked to enforcement will not only raise awareness but will also reduce mortalities and gain greater public support for stricter enforcement,” he said.

He, therefore, rallied the media to join the education programme.

He commended Accra-based radio station Citi FM for the campaign it launched on road safety, culminating in the arrest and prosecution of road traffic offenders.

The Managing Director of Omni Media, owners of Citi FM and Citi TV, Mr Samuel Atta Mensah, expressed concern about the increasing disrespect for the police, particularly by the political class and the rich, as well as disrespect for the law by the middle-class.

He said enforcement was the greatest challenge in dealing with the country’s road carnage.

The Minister of Employment and Labour Relations, Mr Ignatius Baffour-Awuah, in a speech read on his behalf, said road accidents contributed to a significant drain on the human resource of the country.

He said research on work-related diseases was needed to inform policymakers and others about the development of preventive tools and regulations.

The Board Chairman of the BPS, Dr Edward Narh, noted that the blood spilled on the roads was a call on the living to stem the tide of road accidents.

“Perhaps, it is the ceaseless tears of many at homes devastated by the news of another life claimed in transit that has rounded us up here today,” he said in a speech read on his behalf.