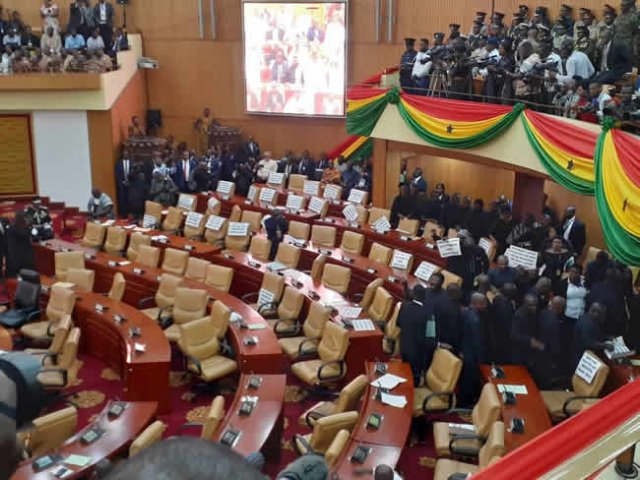 Social media users have reacted to the Minority's decision to walk out of Parliament when the President delivered the State of the Nation Address (SONA) on Thursday, February 20, 2020.

Clad in black, one after the other, the minority members of parliament â€˜angerlyâ€™ walked out of the chamber shortly after President Akufo-Addo took his seat.

Social media users who were keenly following the proceedings on television, radio and online couldn't believe their eyes.

Many have condemned the NDC's action.

Below are some comments from social media users:

So you chose to walkout of parliament when the national anthem was ongoing? How stupid was that decision? #SONA2020 #Axeman

See the Minority too? They want to come back to power wih this attitude #SONA2020 they will do worse

Any media house that call on the minority to speak to issues regarding #SONA2020 will be doing Ghanaians a great i justice, folks did not stay to listen, wonder what they will be speaking to actually

This isn’t the first time tho but then it’s shameful . #SONA2020

That's so wrong and unpatriotic of the minority being that this is a very serious business of the nation.

For God sake you owe the people of Ghana (the very people that elected you) a duty to accountability.

So the state of the nation address no, If u sit down n listen, what good is it gonna do to you???we no get time for such things oo💯😂😂😂Like i go tk watch Johnny Sins😂😂😂😂#SONA2020