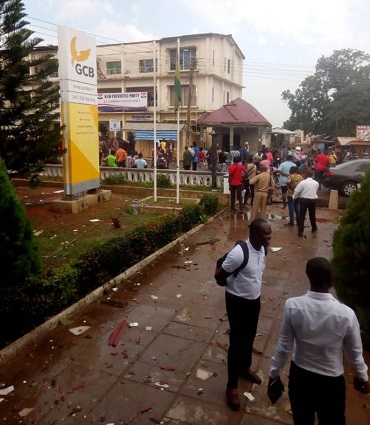 The National Disaster Management Organization, NADMO is estimating that over three hundred persons have been affected in the violent rainstorm which occurred at Somanya in the Eastern Region yesterday.

The storm ripped off the roof of many houses, destroyed properties and caused many injuries.

Several homes in Somanya and hundreds of residents are still in distress.

Reports indicate that some residents are of the belief the disaster was as a result of some libation and traditional activities that took place over the weekend following the Kloyosikplem festival for the Yilo Krobo people.

The residents believe the incident occurred as a result of annoyance of the gods.

Speaking to Starr FM, the Yilo Krobo Municipal NADMO Director Michael Jackson said a section of the community have been cut off electricity due to the incident

''We are expecting over 300 persons affected as it is now. But our assessment will indicate as to the exact number of persons that has been affected. As it stands now, half of Somanya township has blackout and it has affected the main tension pole that services the community. The High tension is also down and the ECG is quickly mobilizing to get to work and fix electricity that has been cut off.''

Mr Jackson added that a lot of cables are damaged. Adding it's going to be a major task for the ECG to fix the cables immediately.

He also assured the affected persons to remain calm as NADMO joins hands with the stakeholders to solve the impending situation.

Commenting on the development, the MCE of Yilo, Krobo Kupualo Ebenezer Tetteh also said the assembly will do everything within its power to bring relief to the affected persons

“We have recorded only one casualty but we are told the victim has been discharged. I sympathize with the people of Somanya. I am ready to support them in any way possible. Especially for the schools that were affected, work has started to put the school in good shape for teaching and learning to continue''.