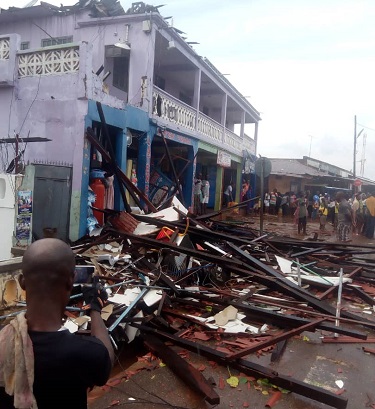 At least four pupils have been injured in the violent rainstorm that hit Somanya township Monday, November 25, 2019.

The Yilo Krobo Municipal Director of the National Disaster Management Organization(NADMO), Michael Jackson Bruku told Starr FM.“We have some few casualties but they are currently at the Polyclinic receiving treatment. About four or five of them.

They are schoolchildren, they got injured in the hands, head and neck”

Meanwhile, MCE Yilo Krobo Kupualo Ebenezer Tetteh says all is being done to assist victims of the incident.

“The downpour lasted for not more than 30 minutes but the destruction was great. We have recorded only one casualty but we are told the victim has been discharged. I sympathize with the people of Somanya. I am ready to support them in any way possible. Especially for the schools that were affected, work has started to put the school in good shape for teaching and learning to continue''.

A 20 minutes violent gust of wind wreaked havoc in Somanya township Monday between 3:30 pm and 4 pm.

Many houses and buildings including a storey building housing Barclays Bank, Yilo Stars Micro Finance company, Nanatel-MTN agent have all been ripped off.

The Ghana Commercial Bank Branch in Somanya was mildly affected. Staff of the affected companies run helter-skelter for safety.

Many trees toppled in the high wind-blocking roads and streets.

Schools, Police station, Polyclinic, in the area were all affected. Many cars parked in the area got smashed.

Power supply to Somanya township has also been cut off.

Officials of the Ghana National Fire Service, the Police and National Disaster Management Organization had joint rescue and salvage operations to prevent further casualties and damages.

The team also used a chainsaw machine to cut trees that blocked major roads and streets for free flow of traffic after nearly an hour of gridlock.

A resident said: “the rainstorm lasted 20 minutes with rains. It has destroyed the roof of two separate storey buildings housing Barclays Bank, Nanatel of MTN and residential apartments. This storm has never been experienced here ”

“It also minutes also destroyed part of the GCB bank Ltd. Just the opposite and adjacent the destroyed buildings. This brought heavy traffic to the Somanya township that the presence of the Ghana Police Service was called to control”

He added that “the main building by name Gimigreen has its roof destroyed that, urgent attention is required from NADMO. some private cars were also damaged in the process.

The Yilo Krobo Deputy District Director of National Disaster Management Organization, Bismark Angmor, described the incident as devastating but assured that the organization and its partners were doing their best to salvage the situation.