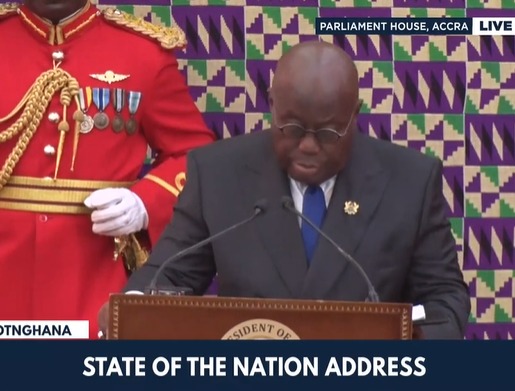 President Akufo-Addo says his government will not shield anyone who is found guilty in the missing excavators saga.

The President said this while delivering the State of the Nation Address in Parliament today February 20, 2020.

He said anyone found guilty will be made to face prosecution irrespective of their party affiliation.

"Operation Vanguard has been successful and over 4000 miners have received training in sustainable mining. 1200 illegal mining machines were seized and a number of these machines are missing, police made arrests and no one will be shielded if found guilty irrespective of their political affiliation".

He also said the National Democratic Congress (NDC) gave up the fight against galamsey but his government is determined to tackle the menace to the core.

"NDC gave up the fight against galamsey but we took it upon ourselves and tackled it. A large part of the population gave me the support to do it because of how it was destroying our environment, the battle we launch was not against mining but against illegal mining. Gov't will not weaken its stance on galamsey."

It will be recalled that in January this year, Kwabena Frimpong-Boateng Minister for Environment, Science, Technology & Innovation and also Chairperson for the Inter-Ministerial Committee on Illegal Mining (IMCIM) disclosed that most of the excavators that were seized from illegal miners have vanished.

That informed the police and some arrest have been made so far, New Patriotic Partyâ€™s Central Regional Vice Chairman, Horace Ekow Ewusi being arrested as well.