Supreme Court to rule on Amewu's case on Jan 5 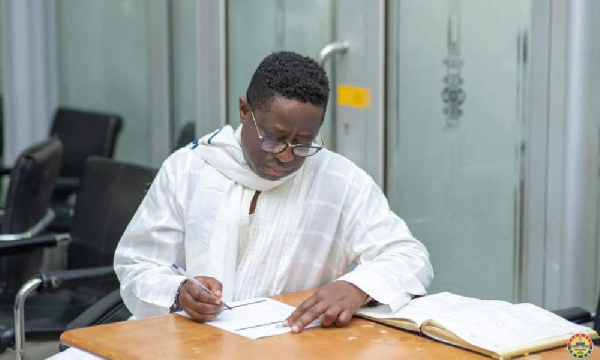 The Supreme Court has set Tuesday, January 5, 2021, to rule on the case of Member of Parliament-elect for Hohoe Constituency, Peter Amewu.

The State is challenging an injunction placed on the gazetting and swearing-in of Amewu as Hohoe MP.

The State through a Deputy Attorney General, Godfred Dame, filed a motion at the Supreme Court to fight the injunction placed on Amewu by the Ho High Court.

The injunction was granted after some residents of Santrokofi, Akpafu, Likpe, and Lolobi (SALL) argued that the Electoral Commission’s failure to allow them to vote in the just-ended parliamentary elections amounted to a breach of their rights.

The panel of judges presided by Justice Yaw Appau is expected to deliver its verdict at 12noon after the parties involved have argued their case in court.

Today in court, Lawyer for five individuals Tsatsu Tsikata, argued that CI 128 which placed SALL in the Buem constituency was unconstitutional because it was not gazetted on the day it was laid before parliament as required by the 1992 constitution.

But a Deputy Attorney-General, Mr Godfred Yeboah Dame earlier moved an application urging the Supreme Court to quash an injunction by the Ho High Court on the gazetting of Mr John Peter Amewu as the Member of Parliament (MP)-elect for Hohoe.

According to him, it was “erroneous” for the Electoral Commission (EC) to have prevented the people of SALL from voting in the parliamentary election that took place on December 7,2020.

He argued that a new constitutional instrument CI 128 which came into force on August 11, 2020, placed SALL under the Buem constituency.

“If anything, the election in Buem should rather be annulled for the people of SALL to vote and not the Hohoe Constituency,” he argued.