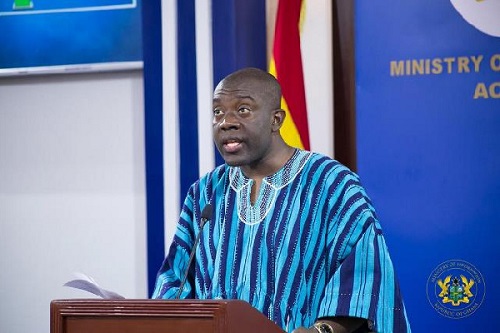 Minister for Information Kojo Oppong Nkrumah has urged the public to volunteer information to assist the police find the kidnapped Takoradi girls rather than criticize them and call on the CID boss to resign.

The CID boss Maame Tiwaa Addo-Danquah has come under criticisms from the public as her outfit has not been able to rescue these girls.

Speaking at a press conference on Thursday, May 16, 2019, Information Minister Kojo Oppong Nkrumah called on Ghanaians to desist from the numerous criticisms and help the Police with information about the girls.

"I think at this point in time the best conversation is how do we get more information and it is not possible that it is only the main suspect who has information about the girls, somebody will have information out there. Already there has been some preliminary information gathered by the security agencies and they are working with high level collaborate operation with agencies both locally and internationally to deal with this matter".

Last month, CID boss COP Maame Tiwaa Addo-Danquah assured that the service knew where the girls were and that they were safe. She has since backtracked on her comments saying she was misinterpreted but that has generated lots of criticism.

Many are calling for her resignation and the NDC women's wing last week began a petition as they have given her 14 days to produce the girls or resign.