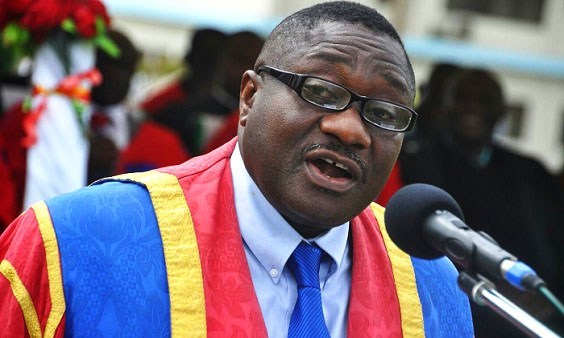 Prof. Mawutor Avoke a former Vice-Chancellor of University of Education (UEW) has had his reinstatement suit dismissed by the Cape Court High Court.

The suit was filed by six dismissed administrative staff of the university led by former Vice-Chancellor Prof.Mawutor Avoke.

The six had sought among other reliefs a declaration that their dismissal was flawed as a purported Economic and Organized Crime(EOCO) report had exonerated them of any palpability to warrant dismissal by the erstwhile Governing Council of the University.

While the University, through the Governing Council, had on many occasions denied ever filing a complaint with EOCO to conduct any investigation on the dismissed staff, the plaintiffs through their lawyer Dr. Raymond Atuguba and interested party Lawyer Alexander Afenyo-Markin had always relied on the said EOCO report to push for the reinstatement of the six dismissed staff.

Avoke who was replaced by Prof.Afful-Broni and has always expressed his displeasure over the manner in which he was booted from office.

The brouhaha regarding the EOCO report was heightened when at a point two versions of the said report were filed by the two lawyers and that witnessed a contestation by the defendant lawyer Lawyer Paa Kwesi Abaidoo.

The trial judge on two occasions when she had expressed her readiness to rule on the matter had to step down her decision for the plaintiffs to file what was finally said to be the official EOCO report.

The trial judge Her Ladyship Justice Mills Tetteh ruling on the matter today Monday, November 11, 2019, dismissed the application of the plaintiffs calling for the removal of Prof. Afful-Broni as the legitimate Vice-Chancellor of UEW and subsequent relief of he being replaced by Prof. Mawutor Avoke.

She went on to explain that Prof. Avoke cannot be granted leave by the court to be reinstated as the EOCO document they are relying on lacks credibility and cannot pass a judicial test.