US based physicians to collaborate with locals to modernize healthcare 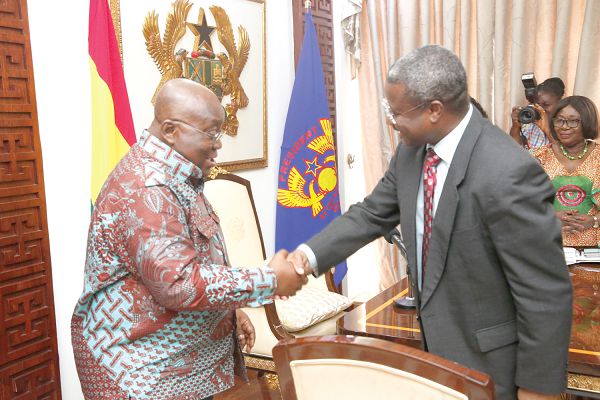 US based physicians to collaborate with locals to modernize healthcare

A group of Ghanaian physicians and surgeons in the USA have resolved to collaborate with their counterparts at home to help modernise the country’s health care.

Professor Elijah Paintsil,first President of the Ghana Physicians and Surgeons Foundation in North America who announced the intention of the group in Accra on January 28 2019, said Ghana lacked most of the components of a rigorous healthcare system, such as the content of the service, and indicated that the group had plans to engage the private sector to make the vision a reality.

Prof. Paintsil said this when he led members of the foundation to call on President Nana Addo Dankwa Akufo-Addo at the Jubilee House in Accra.

Among the delegation were representatives of Yale University and the American Intercontinental Healthcare Group.

According to Prof.Paintsil, “Recently, we had so many unnecessary deaths of people who could have got good care in Ghana but because we lack the infrastructure, they go outside and some are unable to make it''.

We are interested in bringing the skills set we have here,” Prof. Paintsil stressed.

While commending President Nana Addo Dankwa Akufo-Addo for his vision of a Ghana beyond aid, Prof. Paintsil said:

''The country can take on its leadership role and be the first country to have modernised health care for people from all over the continent and the world.”

He was not happy with the present HIV statistics in the country and said in 2010 the rate of mother-to-child transmission was 10 per cent but rose to 19 per cent last year, a situation which, he said, was not good enough.

He added,“We have been observing from the sidelines and we like your leadership style. We want to share with you a legacy you can leave behind and that is modernised health care,” Prof. Paintsil stated, adding: “We want to come home to play a part in healthcare delivery.”

He said the team had spoken to a number of people in the United States of America (USA) and they were ready to come home to assist the national cause.

On the deliverables, Prof. Paintsil observed that Ghanaian physicians were smart people who could be counted in so many high places outside the country but the current healthcare system lacked the enabling environment to make that happen.

“I also think our system lacks good management and governance and that is why we invited the American Intercontinental and Healthcare Group, which has experience in managing hospitals and healthcare systems in other parts of the world, to help manage us.

“They are also coming with instances when they can leverage some of the financial institutions they work with, so that they will help us finance some of the activities that we will do.

“We are ready to be tapped if you give us the go ahead because in the arena of professionals we have not been tapped,” he explained.

“We are not taking their job; we are coming to work with them. We need you to give us the go ahead,” he added.

President Akufo-Addo highlighted the efforts the government was making to improve the health and educational systems of the country to the group.

He said the government had, since assuming office, paid a GH¢1.2 billion debt of the National Health Insurance Scheme (NHIS) to resuscitate the scheme.

He described the mission of the group as an excellent one and noted that the success stories of many countries were because they were heavily dependent on the expatriate human capital.

President Akufo-Addo said he had no difficulty in accepting the offer and concept of the medical professionals, considering the extent of Ghanaian medical presence in the USA, saying “it tells you there is a huge amount of capital out there for us to be able to use”.

He said it would be of great benefit if the country could find a way to bring together all the synergy to be involved in the concept.

He pledged his support for the initiative and said he was happy about the partnership between the foundation and the American Intercontinental Group.

President Akufo-Addo assured them of any intervention they needed to help facilitate the process to improve healthcare delivery in the country.