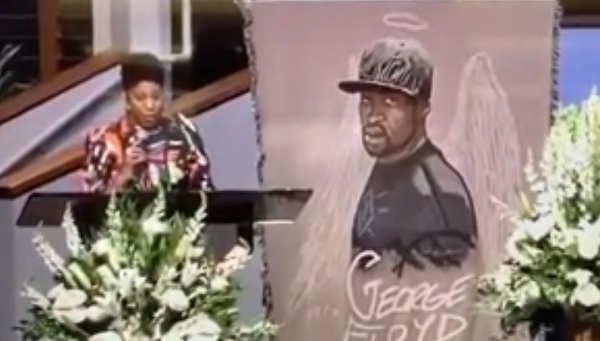 The family of George Floyd have showered praises on President Akufo-Addo.

The family at a funeral service held at the Fountain of Praise Church in Houston, Texas on Tuesday, June 9, 2020, said it was deeply moved by the generous act of the Ghanaian government to solidify the legacy of George Floyd.

The Ministry of Tourism in partnership with the Ghana Tourism Authority, Office of Diaspora Affairs and the Diaspora African Forum on Saturday, June 6, 2020, organised a memorial and wreath-laying ceremony at the W. E. B. Du Bois Memorial Centre for Pan-African Culture in honour of Mr Floyd.

“The family of George Floyd will like to acknowledge the message of solidarity resolution and virtual tribute from His Excellency Nana Akufo-Addo, the President of Ghana. Yesterday, during the memorial, a video produced by the people of Ghana was broadcast for thousands of mourners as they paid their final respects to Mr. Floyd,” Ivy McGregor said at the funeral.

“The family is honoured by President Akufo-Addo’s decision to have Mr. Floyd’s name permanently mounted on the historic Sankofa wall at the Diaspora African Forum in the WEB Dubois centre in Africa,” Ms. McGregor said.

“They are grateful that the country of Ghana stands with the Floyd family and the struggle of all families to change the status quo of racism and prejudice. The family is deeply moved by the generous act by the Ghanaian government,” she added.

On May 25, 2020, a white police officer Derek Chauvin, whiles arresting George Floyd with three of his colleagues handcuffed him lying face down on a city street and kept his knee on the right side of Floyd’s neck for 8 minutes and 46 seconds.

Mr Floyd who could be heard in a video of the arrest that has since gone viral saying he couldn’t breathe subsequently lost his life.

The incident has caused a global uproar against racism and has seen several days of protests in the United States of America which has also been replicated in several countries across the globe.