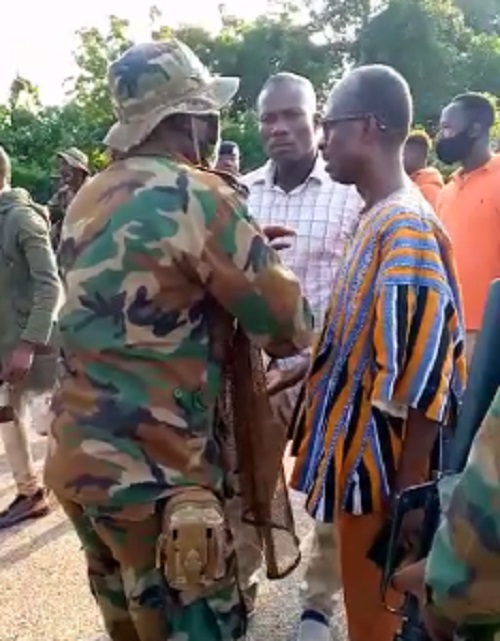 In the video circulated by the NDC, the soldiers have blocked a road in the area preventing some individuals in a KIA truck from entering the town.

The General Secretary for the NDC, Johnson Asiedu Nketia was in the video interacting with the military telling them that they have no role in the ongoing registration exercise.

"Soldiers are not part of our registration and so they have business blocking legitimate people who want to register."

"No one can take your Ghanaian citizenship from you, some vigilantes have been given military uniforms to misbehave so take pictures of them and we will check where they were recruited."

Family of a murdered 28-year-old man at Bando in the Bono region is also demanding justice for their son.
Silas Kyeremeh, a graduate teacher trainee from the Akyem Oda Teacher Training College was killed during a scuffle at a voters registration centre.

Mother of the deceased Serwa Grace said it is very sad for her because she did not even have the chance to see her son after his graduation.

But the Member of Parliament for Banda Ahmed Ibrahim said the Police and the Military dispatched to the area have taken sides in the chaos that has engulfed the constituency since the voter registration exercise began.

According to the lawmaker, personnel of the security agencies show open bias and protect the ruling party members even when they attack opponents.

The claim comes on the back of the killing of a 28-year-old man by some men believed to be supporters of the ruling New Patriotic Party after a scuffle at a registration centre at Banda.

The scuffle was sparked after some persons associated with the NPP parliamentary candidate for the constituency confronted brother of the MP for the area.

Speaking to Starr FM, the legislator said residents of the constituency have lost confidence in the security officials.

“Those who attacked me personally days ago are still walking around, they are well known NPP people, I have given their names to the police but up till now, nothing has happened. And the Police know, many of the residents here have lost confidence in the military and the police because even though they are to protect us, they are only protecting the NPP candidate and his team,” he told Sit-in host Lantam Papanko.