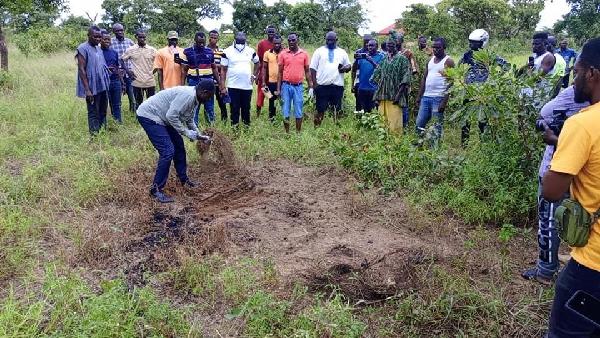 Residents of WA in the Upper West Region have been left in shock after Police discovered a man buried in a shallow grave.

The body is believed to be one of the missing security men in the area who have gone missing under bizarre circumstances.

Out of the five incidents, the Police have found two bodies.

They are all private security persons whose duty posts had blood stains the morning after they disappeared.

Due to the recent killings and strange disappearances of people, the Police Service said it has enhanced security in the Wa metropolis.

The Police in a statement said the “special purpose investigation and intelligence” team has been dispatched to the area under the leadership of the Director-General of Operations of the Police Service to deal with the situation.

“The Police Administration wishes to assure the people of the Wa Metropolis and its environs that it has taken cognizance of their security concerns and the Administration has therefore put in place measures to support the Regional Police Command to beef up security to ensure the safety of all persons in the Metropolis,” the Police statement said.

Residents of Wa on Friday demonstrated over alleged killings of some residents and disappearances of others in the last few months.

The Member of Parliament for the area Dr. Rashid Pelpuo in a statement on Thursday bemoaned the situation and called for urgent action by the security agencies.