You will lose your salaries if the strike continues - NLC to TUTAG, TUSAAG 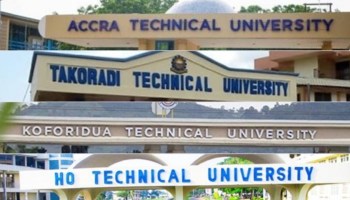 The National Labour Commission, NLC, says lecturers and administrators of Technical Universities may lose their salaries if they don't comply with the order to call off the strike.

Commenting on the development on Starr FM today, the Executive Secretary of the National Labour Commission, Mr Ofosu Asamoah said the striking unions will lose their monies and subsequently their jobs if the strike continues for a period of time

''The directive is for them to go back to the classroom and the directive is for the government to do its part by paying them. Their validation has been done and it been worked on and given that by January 29 their monies will hit their accounts that is what we agreed on at the meeting. You have now gone ahead to say you will defy the order and stay at home''.

''For as long as they stay at home they are engaging in an illegal strike and the government will not pay for an illegal strike the law does not permit that. If they stay out for the period longer than the permissible period without a justifiable course they will lose their job'', he added.

However, the National Council for Tertiary Education on their part has indicated that it has submitted data from the aggrieved tertiary education teachers and administrators to pave way for the payment.

''I can confirm that they have submitted the data, we have worked on it and transferring it to controller and accountant generals' department'', the Executive Secretary of the National Council for Tertiary Education, Professor Salifu Mohammed said.