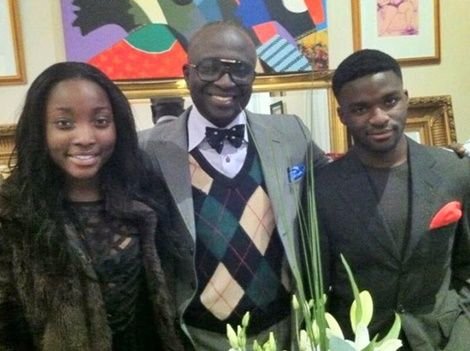 Darkwah Kyei-Darkwah, a model and alleged son of popular Ghanaian broadcaster Kwasi Kyei Darkwah (KKD), has opened up about being gay in a digital magazine, intomore.com and says he had a difficult time coming out about his sexuality.

According to him, he used to hide it and remembered instances when he used to be very quiet, obedient and often stay in his room so as he would be unnoticed when he was staying with his parents.

He has, however, gone past that stage in his life. He currently doesnâ€™t feel the need to conform to anybodyâ€™s standard in terms of sexuality.

â€œThe moment I realised I was gay happened in primary school. Someone called me gay as an insult and I responded with â€œso what?â€ I was totally fine with it, but others werenâ€™t and that was when the discomfort and shame with my sexuality started,â€ he told intomore.com.

He was featured on the website alongside other gay models with African backgrounds on issues they face as queer people of colour.

â€œLiving under my parentsâ€™ roof, I was constantly hiding. Iâ€™d get home from school and be incredibly quiet, helpful and obedient. I stayed in my room most of the time. I was playing the role of the â€˜ideal sonâ€™ so I could just skate by unnoticed. It wasnâ€™t until I was no longer living at home that I started to realise I wasnâ€™t anyone or anything Iâ€™d known so far in my life,â€ he said.

â€œI went through a lot of ups and downs, trying out new ways of dressing, trying out new friendship groups, and reinventing myself over and over again. I realise I did this because I was still trying to fit in a box â€“ the stylish black guy, the cool and macho black guy, the femme, flamboyant and fun black guy. None worked because there is a lot more to me (and any person for that matter) than a stereotype. I am now very comfortable with my sexuality because I donâ€™t feel I need to conform to any one image,â€ he added.

Meanwhile, back home in Ghana, being gay comes with grave challenges. Itâ€™s not accepted and the act is illegal.

The Speaker of Parliament, Mike Ocquaye Jnr, was recently reported have lashed out at human rights group Amnesty International who called on him to relax his stance on gay rights.