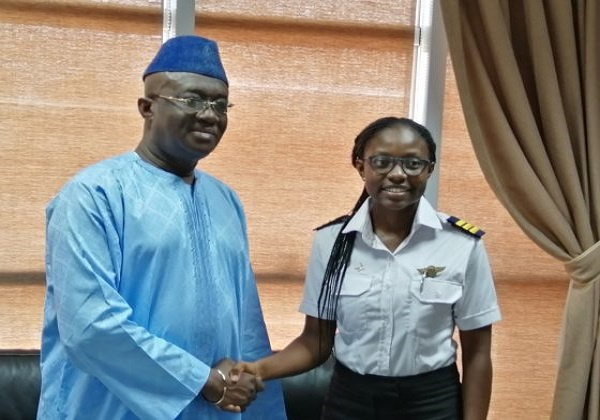 Audrey Esi Swatson is Ghanaâ€™s youngest commercial female pilot and she is only 22 years old.

She had her basic education at the University of Ghana Basic School and later at the Ghana Christian International High School.

At the age of 18 years, she had admission at the Mach1 Aviation Academy in South Africa, where she chased her dream of becoming a pilot. Swatson, who wanted to be a pilot or an athlete, currently holds a prestigious commercial pilot license. She reportedly had her first solo flight on the 4th of April, 2016 at the age of 19 years and got her private pilot license the same year.

â€œMy flight training experience with Mach1 Aviation Academy has developed my ability to operate in a fast-paced, high-performing organization. It reinforced the requirement to make sound decisions in a sometimes ambiguous environment, led by example, and deliver results with little margin for error. â€œI had the privilege of flying with some truly inspirational, selfless flight instructors who embodied fortitude, grit, resilience, courage and integrity,â€ the native of Saltpond in the Central region said.

To anyone who is interested in pursuing an aviation career, Swatson says: â€œHold yourself to high standards, collaborate and support others. Set specific goals, take one day at a time yet having a long-term vision and planâ€.

She added: â€œBenchmark your performance against the best of the best and strive for excellence without arrogance. Build and grow your networks and lean into a mentor who can offer unbiased perspectiveâ€.

Swatson believes in helping others climb the success ladder. â€œWhen you do succeed, be humble, teach others and share your passion for aviation; it will be contagious!â€ she said.

The University of Ghana Basic School earlier this year held a ceremony to celebrate Swatson. She was given a citation for making the school proud.

Addressing the students at the International Youth Summit on Sustainable Development Goals, the youngest Ghanaian female pilot appealed to the government to establish an aviation fund to support young Ghanaians aspiring to be trained as pilots.

Ghanaâ€™s Aviation Minister, Joseph Kofi Adda, after meeting with her said that a pilot training academy will soon be set up in the country to allow interested persons to train in Ghana.

The minister said that the government is currently waiting for a report from investors who have conducted feasibility tests in the country already.