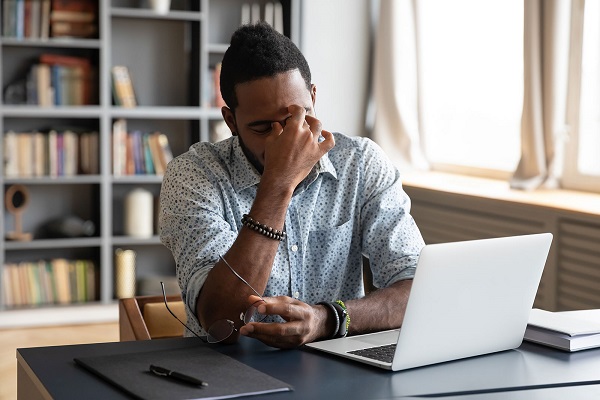 You sleep for seven to eight hours almost every night, only to feel unrested through the morning or even most of the day.

How could you be following a golden rule of sleep so right, yet feel so wrong?

This discrepancy is often due to a heightened state of sleep inertia, a circadian process that modulates memory, mood, reaction time and alertness upon waking, according to a 2015 study.

READ ALSO: 'My husband likes to sleep naked and it annoys me!'

Some people experience impaired performance and grogginess in this period after first turning off the alarm.

The effects of sleep inertia usually go away after 15 to 60 minutes but can last for up to a few hours.

Sleep inertia impairs more sophisticated cognitive skills such as evaluative thinking, decision-making, creativity and rule usage, and gets worse the more sleep deprived a person is.

But even if your job isn't saving lives or driving a truck overnight, experiencing sleep inertia for hours can still affect your quality of life.

The way to address this begins with evaluating your sleep using the "two Qs," said pulmonary and sleep specialist Dr. Raj Dasgupta, a clinical associate professor of medicine at the University of Southern California's Keck School of Medicine. "If you're getting the good quantity sleep, the next question is, 'Am I getting good quality sleep?'"

Dasgupta suggested seeing a sleep specialist, who can check for an underlying or primary sleep disorder.

But there are other more easily modifiable factors that could be interfering with the restoration and recovery processes -- such as memory consolidation, hormone regulation and emotional regulation or processing -- that need to happen during sleep.

"There are a lot of conditions that cause fatigue, but they don't necessarily make people feel like they're ready to fall asleep," said Jennifer Martin, a professor of medicine at the David Geffen School of Medicine at the University of California, Los Angeles, and president of the American Academy of Sleep Medicine.

These can include chronic pain conditions, metabolic or thyroid conditions, anemia, and chronic obstructive pulmonary disease.

If you're feeling inexplicable fatigue, "an important first step might just be a routine physical with your family doctor," Martin said.

Additionally, the National Sleep Foundation has said healthy adults need seven to nine hours of sleep nightly, so you might need more than eight hours of sleep to feel energized.

You could try going to sleep an hour earlier or waking an hour later than usual and see if that makes a difference, said
Christopher Barnes, a professor of management at the University of Washington who studies the relationship between sleep and work.

If you're sedentary, your body can get used to only having to expend low levels of energy -- so you might feel more tired than you should when trying to do basic daily activities, Martin said.

Having anxiety or depression can be energetically taxing, Dasgupta said. These conditions can also negatively influence the time needed to fall asleep, as well as whether (and how many times) you wake up throughout the night, he added.

And sometimes the medications used to treat depression or anxiety can have side effects such as insomnia or blocking deeper stages of sleep, Dasgupta said.

Sometimes our schedules differ on weekdays versus weekends, Barnes said. Schedules can also fluctuate for people with shift-based jobs.

"A very common practice would be to say, 'OK, well, it's Friday night. I don't have to work tomorrow morning, so I can stay up a bit later,'" Barnes said. Maybe you stay up even later Saturday night since you don't have to work Sunday either, then go to bed earlier on Sunday ahead of the work week.

But by this point, you've already adjusted your sleep schedule back by a couple of hours in a short period of time. "This is very much analogous to jet lag," Barnes said. "That rapid reset doesn't work very well."

READ ALSO: What ‘taking a break’ really means for your relationship

More than 50% of your body is made of water, which is needed for multiple functions including digesting food, creating hormones and neurotransmitters, and delivering oxygen throughout your body, according to the Cleveland Clinic. Being dehydrated has been linked to decreased alertness and increased sleepiness and fatigue.

The Institute of Medicine recommends women consume 2.7 liters (91 ounces) of fluids daily, and that men have 3.7 liters (125 ounces) daily.

This recommendation includes all fluids and water-rich foods such as fruits, vegetables and soups. Since the average water intake ratio of fluids to foods is around 80:20, that amounts to a daily amount of 9 cups for women and 12 ½ cups for men.

Having good sleep hygiene includes keeping your bedroom dark, quiet and cold at night -- and only using it for sleep and sex.

Avoid consuming caffeinated drinks less than six hours before bedtime; and limit the consumption of alcohol and heavy or spicy foods at least two hours before bed. Alcohol can prevent deeper stages of sleep, and such foods can cause digestive issues that interfere with restorative sleep.

"The person (or pet) with whom you share a bed has a big impact on your sleep," Martin said.

Maybe your bed partner has a sleep disorder and snores or tosses and turns. Or maybe they have a different schedule that's disruptive to your sleep. Pets can also disrupt your sleep schedule since they don't have the same sleep patterns as humans, she added.

"The most important thing -- if your bed partner snores -- is to get them to see a sleep specialist and have them evaluated for sleep apnea," Martin said. Sleep apnea -- a condition wherein breathing stops and restarts while someone's sleeping -- is common in people who snore, she added.

On that note, sleep disorders are another factor that can dramatically diminish sleep quality, Barnes said.
Someone with sleep apnea might wake up 50 times, 100 times or even more throughout the night, he added.

"Once you're awake, you're no longer in the deep sleep and you don't get to usually drop immediately into the deepest sleep," Barnes said. "Bringing people out of that deep sleep by waking them up is going to generally result in less time spent in the deepest stage of sleep."

Other sleep disorders that can affect daily energy levels include narcolepsy and restless legs syndrome, according to the US Centers for Disease Control and Prevention.

The ideal way to track sleep quality and quantity -- especially if you think you could be diagnosed with a sleep disorder -- is undergoing polysomnography at a sleep clinic, Barnes said.

Apps and electronic wearables -- such as watches or rings -- that measure sleep aren't as accurate as clinic tests, but still provide sufficient information for healthy adults, Barnes said. "I'd want to know that it was developed and then validated against another, more accurate device."