9 reasons why women need to start talking about sex 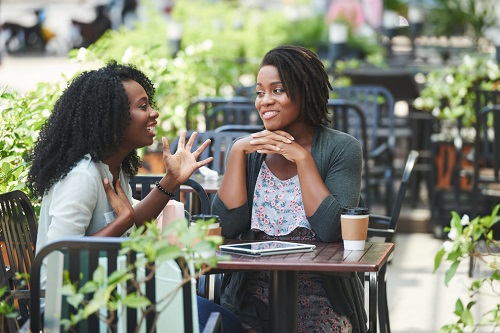 Discover why women should talk about sex and how to talk about sex with confidence, starting today. Learn how women can improve their sex and relationships and their sexual health simply by communicating about sex more.

My friend who recently got married told me her first time having sex was very painful. I confirmed this to be true.

On the flip side, she was angry with me for not telling her or preparing her mind that sex as a first-timer would be painful.

Was it really my fault when we ladies hardly speak about sex?

But now I really do believe these conversations are key to building fulfilling and healthy sex lives. I want to support you in being healthy, happy, and sexy...and talking happens to be a really big part of that.

So, today I'm breaking it down: the big WHY. Why do we have to talk about sex? Why is it important to us ladies in particular to have the talk? And what happens when we're too embarrassed, shy...silent?

1. Without sounding too much like a conspiracy theorist about all these, I want to state that the reason you aren’t talking about sex freely already is that you’ve been conditioned through embedded systems that sex is “too much” for open dialogue.

Women particularly have been socialised not to be so free with their actions or words unless it serves someone else (usually men). Isn’t pushing back against the system reason enough to start having a chat?

2. On that note, men talk about sex all the time. I ‘wank this’, I ‘wank that’…why can’t women also talk so openly? What’s this idea of “ladylike” that we’re trying to uphold?

3. For a lot of women sex is a key part of their life and relationships. Whereas every other significant part of your life you’ll talk about openly -- work, your divorce, the kids, family -- there seems to be a wall with sex. Asking questions, seeking support, exploring how to express yourself -- it’s all done in secret. Why can't women speak about it openly? Sex isn't inherently shameful, we've made it that way.

4. We’re in a chicken and an egg scenario; for a long time, sex has been hushed up in society, and yet because it’s been the norm not to talk we still don’t talk. But silence is actually damaging because it leaves no room for those who need support to seek it.

Just imagine what happened to my friend or a person who has had something happen to them during sex that they weren’t comfortable with, who would they talk to about this?

If we can’t talk about the joys of sex how can we expect each other to disclose when something bad happens. Not to be all hardcore advocates about this, but this silence gives a lot of space for abuse to happen.

5. it’s extremely isolating when you don’t talk about something. When you keep something inside because you don’t know how or who to talk to about it- whether it’s positive or negative- you can feel like the only person in the world who has had this experience. It’s not a giant leap from 'I'm alone with this' to “I’m weird” and “I should be ashamed”.

6. We’re setting a bad example for young girls. If we don’t start talking about sex as adult women we’re basically telling younger girls that sex is something for the bedroom or sensationalized tabloids only.

We're perpetuating all the myths and behaviors in points 1-5, the myths and behaviors that have disadvantaged us- we're allowing them to disadvantage the next generation. Unfortunately, this will mean young girls won’t actually have the language to speak about what’s going on in their sex lives or their bodies or their heads. They simply won’t know how to express themselves.

7. It can be detrimental to your health if there’s no open dialogue about sex. If you can’t talk about sex how are you ever going to approach a sexual health clinic or have cervical screening? You do actually have to talk to the healthcare professional in the room, you will have to say the word “vagina” (un)fortunately and you’re going to have to take responsibility for your sexual health at some point.

8. When you start being more open about sex and willing to learn and explore you can advocate for your own needs. You can tailor your sex life into something that suits you. No more lying back and thinking of England, finally!

9. Talking about sex encourages you to take notice of your body and this is great when considering your general health. As women, we’re very good at getting on with things and not great at self-care, so things easily get missed.

Sexuality is innately linked to your body, getting to know what’s normal for you is great when working out if something is wrong if you need advice or support.

Early detection of any changes is beneficial; prevention is better than cure.