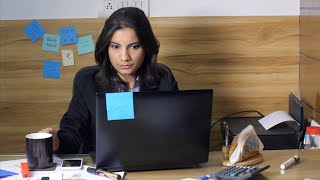 We have enough study reports and evidence pointing at the dangers of leading a sedentary lifestyle. Unfortunately, we spend most of our time in the workplace doing jobs that hardly involve vigorous physical activities. No wonder, the threat to our health increases under such circumstances and added stress can only make matters worse. But did you know, demanding or stressful jobs can have different effects on men and women? Interestingly, stressful jobs can make one gender gain more weight than the other. Read on to know more.

2.The study
According to a study conducted by the researchers at Sahlgrenska Academy, University of Gothenburg, women are more vulnerable to gain weight as compared to men when they have a demanding job. â€œWe were able to see that high job demands played a part in women's weight gain, while for men there was no association between high demands and weight gain,â€ said Sofia Klingberg, a researcher in community medicine and public health and the lead author of the study.

After studying 3,872 participants for twenty long years, the researchers arrived at some interesting conclusions. They found that extended exposure to demanding jobs made only the women participants gain weight. Almost 50 per cent of the women who had very stressful and demanding jobs reported a major increase in their weight during the 20-year study. Also, the increase in weight of these participants was 20 per cent more than women with less stressful jobs.

4.Â What made women gain weight?

Unfortunately, the researchers could not find why demanding jobs made only women gain weight. However, they pointed at the lethal combination of shouldering more household responsibilities and attending to a demanding job might be the reason behind this. â€œWhen it came to the level of demands at work, only the women were affected. We haven't investigated the underlying causes, but it may conceivably be about a combination of job demands and the greater responsibility for the home that women often assume. This may make it difficult to find time to exercise and live a healthy life,â€ Klingberg says.

5.Â People with low control over their work gained weight too

READ ALSO:7 types of friends you must dump right now

6.â€‹Itâ€™s important to destress at work

So, is there a way to check weight gain induced by the stress at the workplace? Definitely, changing the job is not a feasible option. But people can at least take measures to include activities that help them destress at their workplace. Deep breathing can be very helpful to beat the stress at work. Also, sitting for long hours can only add to weight gain and hence it is very important to stretch your limbs once in a while. There are many stretching exercises that a person can do while sitting on a chair and going out for a brisk walk during lunch hour can also be helpful. Remember, where there is a will, there is always a way and a demanding job should not be the excuse to ignore your health, right?