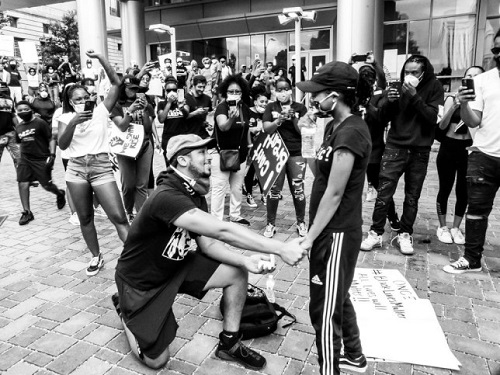 Xavier says Marjorie is really shy, so he was worried about her saying yes (Picture: 4C Visuals Group
Shares

The images from the Black Lives Matter protest have been painful and upsetting to witness – but out of the darkness there have been some rays of hope.

The moment when an adorable young couple got engaged in the middle of a protest in North Carolina was a particularly hopeful moment.

Amid the powerful messages and protesters demanding racial justice, Xavier Young dropped onto one knee and asked the love of his life – Marjorie Alston – to become his wife.

Being proposed to while surrounded by protesters and police and wearing a face mask because of a global pandemic, probably isn’t exactly how Marjorie pictured this magical moment – but it didn’t seem to matter at all and she said ‘yes’ before slipping the ring on her finger and embracing her new fiance.

‘I wanted to ask her at the protest because going was her idea,’ Xavier tells Metro.co.uk.

‘She even helped me play sick to get off work. So her being four months pregnant and still wanting to go and make her voice heard, that really solidified it for me.’ 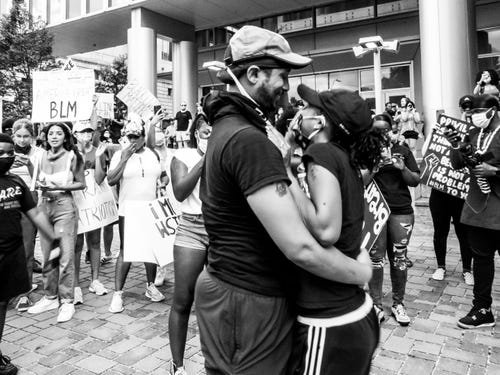 During the protest, Xavier just felt like it was the perfect time to ask his big question, and he did it as the crowd started to head towards Downtown Raleigh.

‘She was shocked more than anything,’ says Xavier.

‘She knew I had had the ring for about a week, but she had no idea I was going to pop the question with so many people around. She’s really quite shy.

‘I myself wasn’t nervous. I didn’t think people would care that much. I was just hoping she would say yes!’ 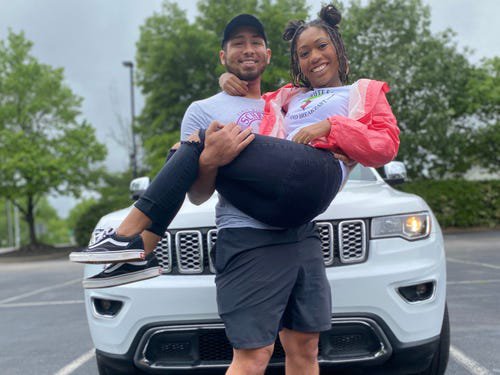 Luckily, the proposal went smoothly and Marjorie agreed to marry Xavier. The couple are now even more excited about their future, as Marjorie is due to have their first child in a matter of months.

‘The people around us were elated for us,’ says Xavier. ‘They cheered us on more and more as the crowd grew.

‘One guy was heard in the video saying – “And look! Out of the storm comes something beautiful,” so people were really feeling it.’ 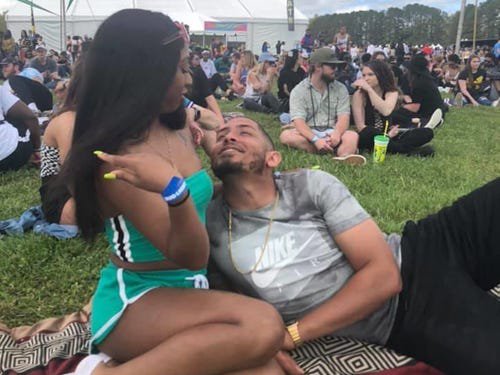 The protests that have swept every state in America and are now spreading throughout the world, are really important to this young couple. They’re keen to march for justice and campaign for change.

‘We were at the protests to protest police brutality specifically against black people and protesting the death of George Floyd,’ explains Xavier.

‘It’s important to us because we’re a black couple, with a black child on the way. So situations like this hit home for us.’