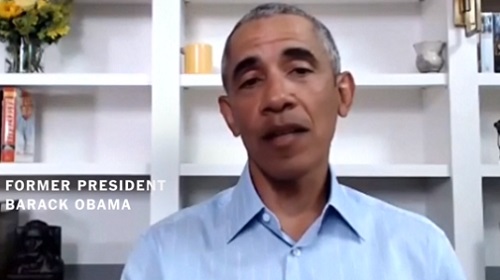 Former President Barack Obama threw his support behind the efforts of peaceful protesters demanding police reforms during his first on-camera remarks since a wave of protests over the killing of George Floyd convulsed the country and upended the 2020 election.

Mr. Obama, offering a strikingly more upbeat assessment of the protesters than President Trump and White House officials, said he believed only a “tiny” percentage had acted violently.

“For those who have been talking about protest, just remember that this country was founded on protest — it is called the American Revolution,” Mr. Obama said from his home in Washington. He made the comments during an online round-table event with his former attorney general Eric H. Holder Jr. and activists from Minneapolis sponsored by My Brother’s Keeper Alliance, a nonprofit group Mr. Obama founded.

“Every step of progress in this country, every expansion of freedom, every expression of our deepest ideals have been won through efforts that made the status quo uncomfortable,” said Mr. Obama, who adopted a conciliatory tone that contrasted sharply with Mr. Trump’s tweets and public remarks. “And we should all be thankful for folks who are willing, in a peaceful, disciplined way, to be out there making a difference.”

Mr. Obama called on every mayor in the United States to review use-of-force policies and to aggressively pursue an eight-point slate of police reforms that include mandatory de-escalation of conflicts, a ban on shooting at moving vehicles, timely reporting of violent incidents, and prohibitions on some forms of restraint used by the police.

“Chokeholds and strangleholds, that’s not what we do,” Mr. Obama said as he sat, tieless in blue shirt sleeves, in front of a bookcase.

He said officials in New York City and Chicago had already agreed to adopt the measures. Other localities, including Atlanta, quickly followed suit.

Mr. Obama also said that the “vast majority” of police officers, in his view, were not violent, and predicted many would ultimately support reforms despite the opposition of some unions.

Reflecting on the larger meaning of the protests, Mr. Obama said the unrest after Mr. Floyd’s death was “unlike anything I have seen in my lifetime” and expressed hope that Americans would be “reawakened” to unite around racial justice.

“In a lot of ways, what has happened in the last several weeks is that challenges and structural problems here in the United States have been thrown into high relief,” he said. “They are the outcome of not just an immediate moment in time, but as the result of a long host of things — slavery, Jim Crow, redlining and institutional racism.”

With the exception of his support for protesters, Mr. Obama confined his remarks to the issues of policing and racial disparities in health care during the coronavirus pandemic that have led to higher rates of infection and death in nonwhite communities.

Mr. Obama, as he often does, tried to avoid a one-on-one battle with his successor, a fight he thinks will energize the president’s conservative base and overshadow his friend Joseph R. Biden Jr., the Democrats’ presumptive nominee.

Mr. Obama did not directly address Mr. Trump’s bellicose comments or the president’s demand that the authorities “dominate” protesters, although people close to the former president said he was outraged by the use of chemical spray on protesters before Mr. Trump walked to a fire-damaged church near the White House and brandished a Bible.

Instead, Mr. Obama expressed optimism that the reform effort could transcend political divisions. He said that he was heartened by polls showing broad support for their grievances, and that this made the current situation more heartening than the protests in the late 1960s.

Mr. Obama’s remarks tracked closely with two essays he posted online over the last week in which he implored young protesters to channel their rage into political action by turning out for Mr. Biden in November and to embrace local reforms to hold police officers accountable for abuses of power.

“We should be fighting to make sure that we have a president, a Congress, a U.S. Justice Department, and a federal judiciary that actually recognize the ongoing, corrosive role that racism plays in our society and want to do something about it,” he wrote in a post on Medium on Monday.

In recent appearances, Mr. Obama has become more forceful in his criticism of the White House, hammering Mr. Trump’s actions without invoking his successor’s name. Mr. Obama rebuked the current administration’s response to the coronavirus pandemic as “chaotic” and questioned Mr. Trump’s commitment to the “rule of law” in a call with former members of his White House team last month.

For all his outward calm, Mr. Obama’s passions are running high, and the former president is finding it harder to stay on script, friends said. Over the last few days, he has been working the phones with close associates, including Mr. Holder, and strategizing about the best way to address the issues without inflaming the crisis.

On Tuesday, a Minneapolis radio station reported that Secret Service officials were making preliminary preparations for a high-level visitor, perhaps Mr. Obama. But people close to the former president said he had no intention of traveling there this week — although they did not rule out Mr. Obama’s participation in related events in the future.

Shortly before Mr. Obama spoke on Wednesday, former President Jimmy Carter issued a statement calling for peaceful protest and systemic change. “As a white male of the South, I know all too well the impact of segregation and injustice to African-Americans,” the 95-year-old former president wrote. “We need a government as good as its people, and we are better than this.”

Those comments came a day after another former president also presented an alternative vision of the protests to Mr. Trump. In a lengthy statement, former President George W. Bush expressed solidarity with the demonstrators in the streets and, without naming the incumbent president, warned against trying to suppress the protests.

“It is a strength when protesters, protected by responsible law enforcement, march for a better future,” Mr. Bush said on Tuesday. “This tragedy — in a long series of similar tragedies — raises a long overdue question: How do we end systemic racism in our society? The only way to see ourselves in a true light is to listen to the voices of so many who are hurting and grieving.”

Mr. Bush, the only living Republican former president — and one who refused to vote for Mr. Trump in 2016 — made no direct reference to the current president. But Mr. Bush spoke after Mr. Trump’s photo op havoc, and the former president’s comments read like a rebuke.

“Those who set out to silence those voices,” Mr. Bush said, “do not understand the meaning of America — or how it becomes a better place.”

Mr. Obama struck a similar tone Wednesday, saying the overall message of the protests was simple, admirable and unifying: