What really happens to sexual desire during marriage? 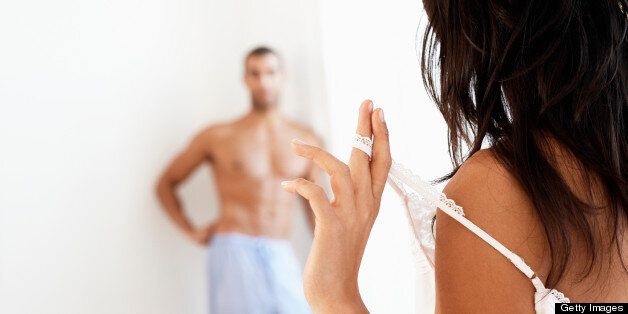 What really happens to sexual desire during marriage?
Shares

Many a movie, novel, or opera ends with a loving couple getting married.

If it is a modern work, the implicit “happily ever after” includes plenty of sex. Yet for years, the data have shown a gradual decline in sexual frequency during marriage.

We tracked newlywed couples over the early years of their marriages. Every six months or so, they answered questionnaires about their sexual desires, their marital satisfaction, and other factors. No two couples are exactly alike, of course, but the general pattern was clear from both studies. Over the first four or five years of marriage, the wife’s sexual desire declined steadily, while the husband’s showed no change. The same pattern was found for the questions that asked about desire specifically for sex with one’s spouse and for sex with anybody in general. Five years into the marriage, the average husband’s desire for sex is the same as when he walked down the aisle, but his wife’s desire has dwindled.

READ ALSO: This is what it’s ‘really’ like to date someone in an open relationship

What’s more, we found that marital satisfaction for both husband and wife deteriorated in step with the wife’s loss of sexual desire. (The husband’s sexual desire was irrelevant to anybody’s marital happiness.) Might wives lose sexual desire because the marriage is turning bad? No: Time-lag analyses indicated that her loss of desire came first, leading to lower satisfaction later. Early levels of (dis)satisfaction did not predict how rapidly the wives lost interest in sex.

Crucially, it was not due to childbirth. Becoming parents made the mismatch worse, as in steeper declines in wives’ sexual desire. (In one study, but not the other, becoming a father significantly increased the man’s sexual desire!) Nor was it due to stress or depression, though those may have contributed to part of the problem in some cases.

Folklore’s bottle theory aside, early signs of this pattern have been noticed. Bettina Arndt, an Australian journalist, had an idea for a racy bestseller, which was to have couples keep diaries of their sex lives. Her book, The Sex Diaries, did report some lively and creative practices, but the more common theme was that of husbands begging for sex while wives refused. Pillow talk filled with memorable phrases like “get that thing away from me!” Arndt concluded, ruefully, that something seems to cause women to “go off sex” once they settle into a committed relationship.

A possible explanation that fits our data is that female sexual desire increases during the brief phase of passionate love. Nature may have arranged that as a way of encouraging the man to make a long-term commitment. Humans evolved from other great apes, but none of the other apes take fatherhood seriously, let alone provide daily food and shelter for their children’s mother over many years. Human men are remarkably different in that regard, and evolution had to arrange some serious changes to bring that about. Men’s sexual desire may have taken on an addictive character, so that men become attached and keep hoping for sex even when the yield of pleasure dwindles, as in some drug addictions. Meanwhile, nature arranged for women’s desire to increase temporarily during courtship. The couples in which the woman’s desire boosted enough to get the man hooked produced more children than others. We are descended from them.

In this view, then, it’s not that marriage is bad for women’s sexual desire. Rather, the phase of passionate love boosts it, and when that kind of love wears off, sexual desire goes back to baseline.

The seeds of later dissatisfaction are thus sown by nature’s method of keeping couples together long enough to provide care for the children that sex will bring. The young man thinks he has found his sexual soul mate. Any reservations about the woman or about his need to provide for her seem minor compared to the prospect of enjoying this great sex every day for the rest of his life. When she stops wanting to have sex, he may think she has changed unfairly. After all, his sexual desire is the same as it always was.

Meanwhile, the woman may be as surprised as her husband by her loss of desire. During the year or two of intense passion, she desired sex as much as he did, or almost. Crucially, she never agreed to have sex when she didn’t feel like it. When her desire wanes, she may think he is the unfair one, because he is wanting her to offer him sex even when she is not in the mood. He didn’t ask for that back during the passionate courtship. (Admittedly, he didn’t have to.) It may be tough for her to deal with the unexpected problems of her lack of desire, his continued desire for sex, and the sense that the quality of her marriage is suddenly going down. She may or may not make the connection between her loss of sexual passion and the mutual sense that neither is as satisfied with the marriage as previously. After all, that only emerged from our large data set.

Declining happiness in marriage is a serious problem. I suspect it’s because when the wife starts to lose sexual desire, both parties think this indicates a problem with their marriage, and they blame themselves or each other. Psychology could strengthen marriages if it could help people realize that this is a common pattern. Rather than being a sign that the marriage has problems, they might see it as a standard problem that they can solve as a couple.

Via Psychology Today | The author, Roy F. Baumeister, Ph.D., is one of the world’s most influential psychologists. He has published over 700 scientific works, including over 40 books.