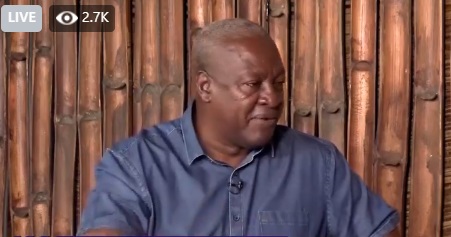 The flagbearer for the NDC, John Mahama says the swing regions in the country are inclining in favour of the party.

According to him, comparing 2016 electioneering period and now the swing regions are moving in the direction of the NDC.

These regions he said include Central, Western, Brong Ahafo and the Greater Accra Region.

John Mahama said base on their analysis they are likely to win these regions. Explaining why he thinks the regions will vote for the NDC, he said the NPP got most of their policies wrong.

Stating one of the regions the NPP will lose the elections, he said they have disastrously handled the galamsey fight.

He noted that the illegal miners were just arrested and sacked for NPP members to continue the said illegal act.

John Mahama said there was a time the NDC during the administration of Prof Mills chased the illegal miners with soldiers but that is not the right way to deal with the situation.

He said the best is to have a well-regulated sector and incentives for the miners to prevent the illegal operations in the forests.

Addressing concerns that the NDC used funds meant for cocoa roads for other roads that were not part of cocoa regions, he said those raising concerns do not understand the cocoa road projects.

He said the idea is to develop roads in cocoa regions, and the funds were not used for any road that was not in a cocoa region.

President Akufo-Addo in honouring a constitutional obligation will deliver a…