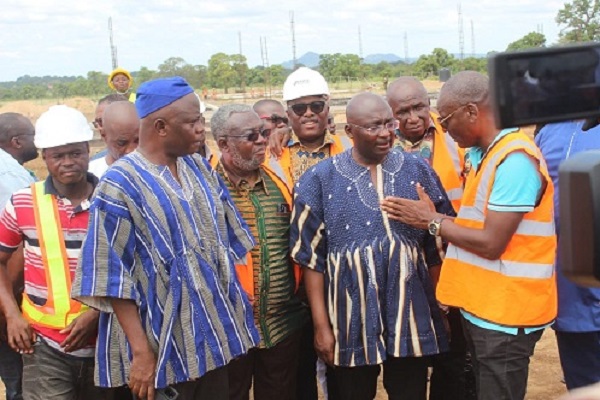 The Vice President, Dr. Mahamudu Bawumia has promised to prioritize some educational and road infrastructure in the Kassena-Nankana West District in the Upper East Region as requested by the Paramount Chief of Paga, Pe Charles AwiahAwampaga II.

The vice President made this remark during his visit to the palace of the Paramount Chief of Paga, Pe Charles Awiah Awampaga II as part tour in the region.

The Chief, therefore, raised concerns of the Girl's dormitory of the Paga Community Day Senior High School (SHS), which was razed down by inferno two years ago had not been renovated, an issue he indicated, had compelled the female students to seek shelter in nearby houses in the community.

Pe Awampaga who spoke through his interpreter when Dr Bawumia paid a courtesy call on him, lamented the deplorable road network, coupled with a broken bridge linking Paga to Navio, Sirigu and Bolgatanga; and appealed to the government to fix it in due course as the situation dealt a big blow to farmers and traders, as they were stalled from transporting their produce to the markets.

The Vice President during the tour also expressed his disappointment in the snail pace execution of an ‘Agenda 111’ hospital project at the Kassena-Nankana West District capital Paga in the Upper East Region.

According to him, the contract was awarded early 2021. He has therefore impressed upon the contractors-AKOFIS Engineering and CITY Entrepreneurs-to get back to site to have the project completed on schedule.

“We have seen that the work being done here is not satisfactory. We need to be making more progress than this, so we are going to encourage the contractors and get the project back on schedule.

“….and we will have to meet with the contractors and get them to move back and get this project back on schedule because we are really behind schedule,” the Vice President said.