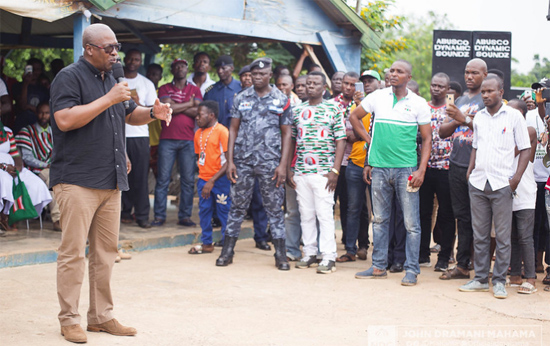 The flagbearer for the National Democratic Congress (NDC) John Mahama says Ghanaians should not believe President Akufo-Addo's sweet talks because it is a scam.

Mahama says Akufo-Addo lied his way into power in 2016 and is doing the same to be handed four more years.

He said Akufo-Addo made promises that he has not honoured and is still making promises in a desperate attempt to retain power.

“This government has been a scam on Ghanaians. In 2016, they said all kinds of sweet things, they said we were sitting on money and that Ghana was sorrowful and that we should vote for them to transform Ghana in 16 months. But today we are even hungrier than we were in 2016,” Mr. Mahama told party supporters in Bongo in the Upper East Region.

“The President said in 2016, that he was coming to fight corruption but today the President and his family are swimming in corruption,” he added.

Mahama further said that the recent resignation of Martin Amidu shows that Akufo-Addo is paying lip-service to the fight against corruption.

He thus urged Ghanaians to swap the NPP for the NDC, to protect the country’s future.

Meanwhile, a research conducted by the Political Science Department of the University of Ghana has predicted that flag bearer of the New Patriotic Party, Nana Akufo-Addo will be re-elected as President of the Republic.