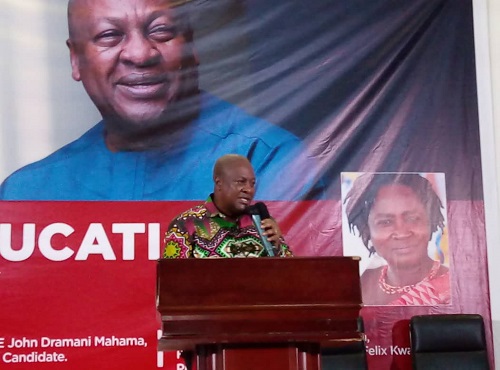 Flagbearer for the National Democratic Congress (NDC), John Mahama says the challenges confronting the free Senior High School policy is as a result of the government's refusal to consult stakeholders extensively before implementing it.

Speaking at a lecture series organised by the opposition National Democratic Congress (NDC) at the University of Cape Coast on the State of Education in Ghana, Thursday, April 11 said the lack of stakeholder engagements is affecting the smooth running of the policy.

“When they [NPP] started this Free SHS, anyone who gave a contrary suggestion was lambasted and called names.

"Not even people from their fold were spared. Now, see the mess they are creating in the educational sector,” he stated.

He also said lack of infrastructure is a big challenge for the effective running of the policy.

“Some of us foresaw the difficulties that they are facing today and that is why we tried to warn them,” he said at the NDC’s Campus Lecture series at the University of Cape Coast on Thursday.

The lecture was under the theme “the state of education in Ghana”.

Ever since the policy was launched, former President Mahama has always said they should have been a wider stakeholder consultation. Mr. Mahama also assured that he would not make the mistake of not seeking counsel from stakeholders if he became President again.

“We must open up to consensus building. I want to assure that if I become President of this country again… within the first three months of assuming office, we would hold a stakeholder meeting on Free SHS and we will form a consensus in this country on how it should be implemented so that we do not toy with the destinies of our children.”

The NDC presidential candidate said it is strange for the government to budget GHS2 billion on the Free SHS policy in this academic year, while other sectors of education are completely neglected.

He urged the governing New Patriotic Party (NPP) to be accommodating of suggestions from seasoned educationists and other stakeholders on education in order not to collapse Ghana’s educational system.

“If you have GHS 2 billion to spend on education, will you spend it on Free SHS?” he quizzed.

Mr Mahama is on a two-day visit to the Central Region where, according to the party, he is touching base with the NDC executives across selected constituencies.

According to the party, the former President will also be interacting with key constituents in fishing communities, market women associations and some opinion leaders.

Mr Mahama is accompanied by the National Chairman of the NDC, Samuel Ofosu Ampofo and other key party functionaries.