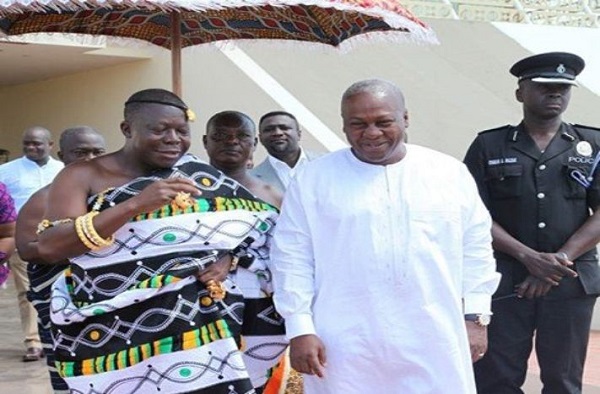 The government says they are not happy about the recent attempts to run down the Asantehene, Otumfuo Osei Tutu II following his comment at the United Nations.

Kojo Oppong Nkrumah, Minister for Information speaking at a press briefing on Wednesday, September 18, 2019, said the government does not expect individuals and politicians to run down the chieftaincy institution because of the role they play in national development.

“Traditional authorities in Ghana have been very helpful in helping to support the cohesion of the Ghanaian society, so even if the truths they speak are unpalatable to you, we should not be attacking and be running them down,” he said.

He said the government considers the invitation of Ashanti overlord to speak at the UN as a mark of high respect for the Otumfuo himself and the traditional authority in the country in general.

He added that it is unhealthy for politicians especially to engage in such an action to run-down traditional authorities.

“Particularly for politicians who every now and then will have to be brought together by these same traditional rulers. For young politicians as such, we should be very careful and desist from any act that appears to be calling them names and attacking them,” Mr Oppong Nkrumah said.

Background
The Asantehene, Otumfuo Osei Tutu in a speech at the United Nations conference over the weekend made claims about his intervention in the 2016 General elections, persuading the losing candidate to accept defeat, a claim which has been vehemently denied by the NDC and the office of President Mahama.

This has angered many groups in the Ashanti Region who believe the response from Mahama's camp to the Asantehene is not the best and he should retract.