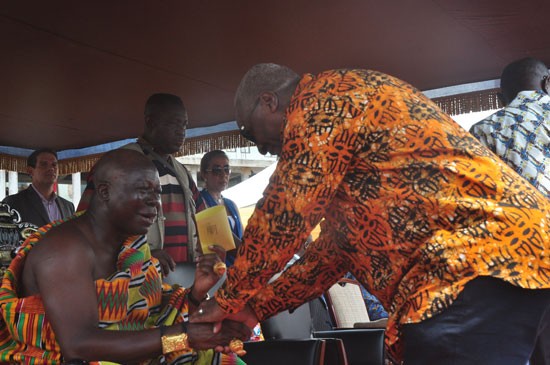 The Asante Youth Association have come out to condemn the press statement released by the office of former President John Mahama denying the involvement of the Asantehene Otumfuo Osei Tutu II in his decision to concede defeat in the 2016 polls.

The Youth described the comments as attempts to use their ‘political gains’ to destroy the Asante Kingdom.

The Director of Operations for the Association, Nana Oppong Boadu called on former President John Mahama to dissociate himself from the press statement released by Mr. Julius Debarah.

READ ALSO:  Mahama was not persuaded by Manhyia to accept defeat in 2016 - Julius Debrah

They have given the former President 48 hours to retract the statement or face their wrath.

“We are giving John Mahama 48 hours to come and retract that he didn’t instruct Julius Debrah to issue that statement. Other than that we are going to make the Ashanti Kingdom a hostile place for himself and his party,” Nana Oppong Boadu stated.

Mr. Boadu also expressed disappointment over the attempt of some political leaders to downplay the relevance of the Asantehene in the country’s democratic process.

“It is very sad that the king has raised the bar and the flag of Ghana and Asanteman and this is how we are paying back. Even if the King erred, this is not the way the NDC should have responded because we have all seen the role the Asantehene has played in our elections, we have seen it. The King has played so many roles in our democratic dispensation, we cannot allow the NPP or the NDC to use their political gains to destroy our kingdom,” he said on Citi FM.

Background
The Asantehene, Otumfuo Osei Tutu in a speech at the United Nations conference over the weekend made claims about his intervention in the 2016 General elections, persuading the losing candidate to accept defeat, a claim which has been vehemently denied by the NDC and the office of President Mahama.