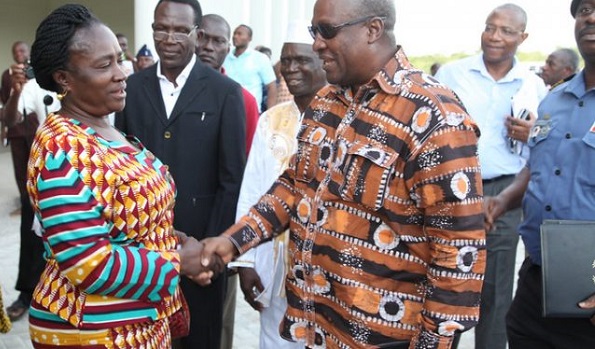 Professor Naana Jane Opoku-Agyemang the newly appointed running mate of the flagbearer of the opposition National Democratic Congress (NDC) says she will do all her best to ensure the party wins the 2020 elections.

She was on July 6, 2020, was named running mate by the flagbearer of the NDC John Mahama.

Professor Jane Naana Opoku Agyemang in her acceptance speech pledged to give off her best.

â€œI pledge to diligently apply myself and dedicate all the energy and intellect I can muster to ensure a resounding victory for the NDC and for our country, Ghana. So help me God.â€

Prof. Opoku-Agyemang said was delighted with the nomination and the overwhelming endorsement by the rank and file of the party.

â€œIt is with deep honour and a high sense of gratitude that I convey my acceptance of the nomination by H.E. John Dramani Mahama, Flagbearer and Leader of the great National Democratic Congress (NDC) to be his Running Mate for the December 7, 2020 election. I am humbled by the overwhelming endorsement my nomination has received from the Founder of the NDC, H.E. Jerry John Rawlings, the Council of Elders, the National Executive Committee and the rank and file of our party, as well as the general public,â€ she added in the statement.

She further noted that she considers her nomination as a big win for all women in the country.

â€œThis historic nomination is not a personal achievement but victory for inclusive and participatory democracy, which enhances the credentials of our country and recognizes the towering role women have played over the ages to achieve the progress we have made.â€

She also eulogized John Mahama, stating that she has â€œworked with HE John Dramani Mahama closely and I know he is a man of vision, a leader you can trust, a public servant of integrity and a courageous leader who makes the right decisions in the national interest at all times.â€

The John Mahama and Prof. Naana Opoku Agyemang will come up against President Nana Addo Dankwa Akufo-Addo and Vice President, Mahamudu Bawumia in the December polls.

Below is the full acceptance speech 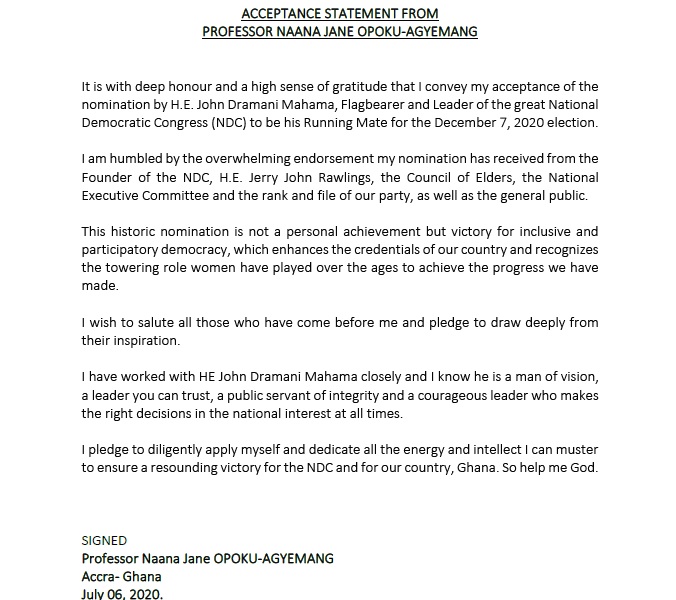