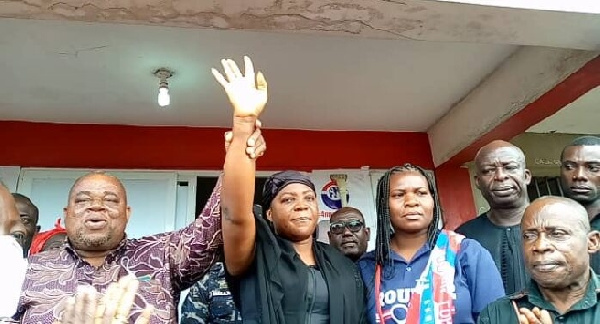 The wife of murdered Mfantseman MP Ms Ophelia Hayford has promised to win the seat.

Ms Ophelia Hayford filed her nomination to contest the seat in the upcoming parliamentary election on the ticket of the NPP.

This follows a decision taken by the party’s National Executive Committee (NEC) after a meeting held on Sunday, October 18, in line with Article 12 of the NPP Constitution.

Addressing the media after filing her nomination she promised to win the seat to honour her late husband.

"First of all, I want to thank President Akufo-Addo and the constituency leaders for the confidence they have in me that I should replace my husband Ekow Quansah. Your actions have given me a sense that we will continue the good works of my late husband. I can now wipe my tears, every good thing my husband did will be continued. I will clinch the seat for NPP and the battle is still the Lord's."

Clad in black with a party-coloured scarf around her neck, the widow was on Tuesday escorted by some party executives and supporters to file her nomination at the EC’s office.

The MP was murdered on Friday, October 9, while returning from a campaign trip.

According to an eyewitness report, while the robbery was ongoing, the MP identified himself.

This allegedly infuriated the robbers who blamed him for the problems being faced by people in the country and shot him.

The Ashanti Regional Police Command said it had arrested another person in connection with the murder of her husband.

The arrest comes less than five days after the police said it had picked up five suspects.

Meanwhile, the funeral rites for the slain MP will take place from 27th to November 27 to 29.