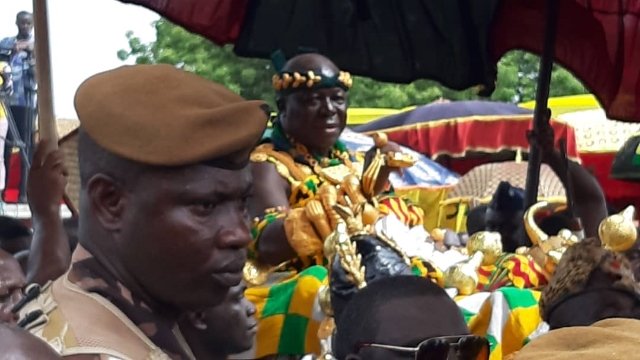 The Asantehene, Otumfuo Osei Tutu II has called on Ghanaians not let their political differences break the peace and unity that exist in the country.

Otumfuo Osei Tutu II made these remarks during the Akwasidae Kɛseɛ on Sunday, April 21, 2019.

He said the presence of the Awomefia of Anlo state, Torgbui Sri III and his kinsmen at the Akwasidaekese, the first ever, provided a clear sign of a new state that was brewing in Ghana.

He said political differences has plunged the relationship between the two states and said it was time for them not to allow politics to undermine the bond that had existed between the two since 1824.

President Akufo-Addo, former President John Mahama were all present when Otumfuo made the address at the Manhyia Palace.

The Asantehene said by extension the country must remove any artificially contrived discord likely to undermine the stability of the nation.

Otumfuo also appealed to President Akufo-Addo and all political parties in the country to let the unity between the Asantes and Anlos to "guide us to our destiny which is a vibrant Ghana developing in peace and harmony."

Otumfuo said it was time to deal all with kinds of rancour, bitterness and violence out of "our political discourse and allow the nation to embrace a new era of peace."

Akwasidae Kɛseɛ
Akwasidae Kɛseɛ is an expanded form of Akwasidae, celebrated every six weeks in line with the Asante calendar which is based on a cycle of 42-two days and nine months in a year.

The Akwasidae Kɛseɛ is celebrated every five years to crown all the Adaes.

Sunday's Adae was the fifth since the Otumfuo Osei Tutu II ascended the throne.