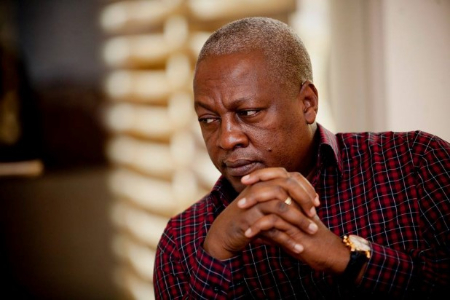 Flagbearer of the National Democratic Congress (NDC) John Dramani Mahama has charged members of his party to "stand together" and "rescue the nation from hardship" in the 2020 general elections.

He made this known on Saturday, December 14, 2019, in the Volta Region at the burial service for the late Victoria Adzo Adzagli-Ametefee, wife of Mr Henry Ametefee, Volta Regional Chairman of NDC.

He asked them to remain prayerful for the party and work for its victory next year, adding, "We dare not fail the country."

He said the wish of the late Mrs Ametefee was to see the NDC in power in 2020 and urged members of the Party to get to work.

The former President said the deceased was known for her hard work and commitment to the Party and that NDC’s victory in 2020 was a must to give her a peaceful rest.

The late Mrs Ametefee died on Sunday, October 27, 2019, at the Volta Regional Hospital, where she was rushed in "critical distress."

She is survived by three children and a husband.

The funeral was attended by the leadership of the NDC from national to local levels, former government appointees, former and sitting Members of Parliament among others.