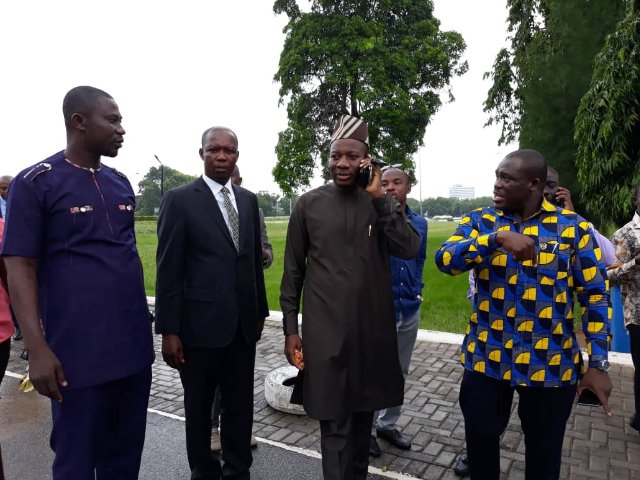 Bawku Central MP, Mahama Ayariga has arrived in court Tuesday afternoon at 12:50 after the court ordered his lawyers to produce him by 1:00 pm.

Accompanying him to the courtroom were a host of Parliamentarians from the opposition National Democratic Congress (NDC) who joined him to show solidarity as he faces the Special Prosecutor, Mr Martin Amidu in court over the charge of fraudulently evading tax on imported vehicles.

An Accra High Court has asked lawyers for MP for Bawku Central, Mahama Ayariga to produce the legislator in court today June 3 at 1:00 pm.

The Parliamentarian is being tried by the Office of the Special Prosecutor for alleged tax evasion and the procurement of some ambulances.

However, Ayariga wrote back to the Special Prosecutor indicating that he cannot be present in court on Tuesday since he is an MP and will be in Parliament.

“I can come to court on any other day when Parliament is not sitting,” Ayariga wrote. Keeping his word, Ayariga did not appear in court when both cases were called on Tuesday morning.

However, the presiding judge, Justice Afia Serwaa Asare Botwe has asked the legislator to be produced in court insisting that “whatever happens you are coming back today, so go and agree when all of you can be present.”

According to JoyNews’ Joseph Ackah-Blay the judge asked the MP to be in court by 1:00pm. The case is a criminal case and cannot proceed without him being present, the judge indicated.

The Speaker of Parliament, Prof. Aaron Mike Ocquaye, has suspended temporarily parliamentary sitting for 30 minutes for broader consultation on the prosecution of the Member of Parliament for Bawku Central, Mahama Ayariga by the Special Prosecutor, Martin Amidu.

The decision by the House on June 4 will allow them to arrived at a decision whether or not to allow the MP to appear in court.