Mahama is clueless, he has no message for Ghanaians - Bawumia 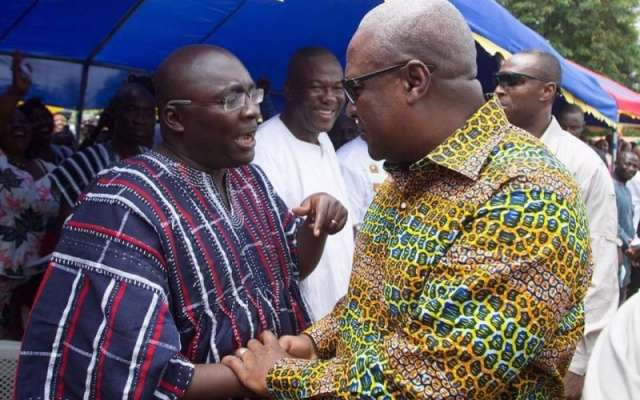 According to Dr Bawumia, Mahama does not have a vision like President Akufo-Addo and that he has does not know what he will do should he win the 2020 general elections.

Dr Bawumia's comments come on the back of recent happenings which has seen Mahama back NPP's free SHS policy, after saying it was not feasible prior to the 2016 general elections.

Mahama says he will not cancel the policy should he win power but will review it and make it better by erasing the double-track system among others.

“If you have a church and you have more and more people coming to your church but you do not have enough seats in the church do you drive them away?

“You do first, second and third service if you need to do it. You do not say go home until I build another church before you come to church and so this is the thinking behind the double track system. We will double track until we complete the construction of all the facilities and we are going to complete the facilities,” Dr Bawumia emphasized.

“It is therefore interesting to hear former President Mahama say yesterday that, now he is committed to free SHS education but he says he will review it when he comes. You have been criticizing this policy since 2012 but as at today [August 15, 2019] he is not able to tell us exactly what he will do,” Dr Bawumia said.
Speaking at a ceremony to inaugurate a $4.5 million fertiliser blending plant on Thursday [August 15, 2019] under the governments One District One Factory (1D1F) policy at Asuboi in the Ayensuano District of the Eastern Region, Dr Bawumia said “it does take vision to transform an economy and a country.”

According to Dr Bawumia, former President Mahama was "clueless and had not told us what he will do because I know he does not know what he will do that is the simple answer."

“I am 100 per cent certain that if John Mahama was a in office today Ghana will not have free SHS neither will we have the teacher training allowance, nurse allowance, the paperless port and also the 1D1F. it takes visionary leadership and courage and this is what we are seeing with President Akufo Addo."

He said former President Mahama had no clue about what he was going to do otherwise he would come out with it since 2012.

"If he [Mahama] had been in the position, what will he do. What are your concrete policies, don’t tell me you want to wait and be voted and you call a stakeholders meeting, that is not leadership, tell us exactly what you will do."

He said the same vision by President Nana Addo Dankwa Akufo-Addo which led to the construction of 181 factories across the country was the same vision which propelled the beginning of the free SHS policy.

He said if President Akufo-Addo had not forecasted to start the 1D1F, there would not have been that number of 1D1F which was creating all those jobs.

“it is the same vision that President Akufo-Addo had when he said we are going to do Free SHS in this country. There were many naysayers when we said we will do free SHS including the former President who said it was a gimmick, a misplaced priority at the time.

“Some even said it will take 20 years to do free SHS but President Akufo-Addo had a vision and he persisted with that vision against all the naysayers and he implemented the free SHS education in his very first year of government,” he said

Today, he said, thanks to the introduction of the free SHS an additional 180,000 students have had the opportunity to be in school and by the end of September, all the three streams of SHS will be benefiting from free SHS education.

Throwing more light on the rational for the introduction of the free SHS, Dr Bawumia in using an analogy of the rotation of church services said “We had a choice and that was either we continue letting our children stay at home or we maximise the use of existing facilities while we bring in new ones.”