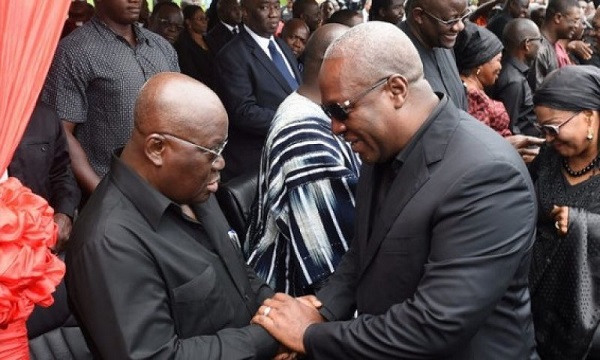 President Akufo-Addo has thrown a subtle jab at the flagbearer of the National Democratic Congress (NDC) John Mahama.

The President who is on a two-day tour in the Volta Region says God is not wicked to make Mahama President of the nation because he does not want Ghanaians to suffer again.

He was addressing Chiefs and people in the Volta Region on Monday, November 4, 2019, and said Mahama lacks vision and foresight to lead Ghana again.

According to Akufo-Addo, the flagbearer of the NDC has failed to outline his policies to Ghanaians but always focused on the negatives in the country.

“My predecessor, John Mahama said that God brought the NPP so that Ghanaians can appreciate the NDC…Ghana has moved on to a new era of hope and progress. We have a leader who has no record…who has no prescription for the future, no policies for the future.

“We have never heard any policy coming from this leader about what is going to happen in the future…always negativity that is all we hear, Ghanaians have moved on. God is not so wicked to punish Ghanaians again with the rule of John Mahama and the NDC that is not what God is going to do, the President said.

Akufo-Addo will end his two-day tour of the Volta Region today November 5, 2019.

Mahama last recently said it was a blessing in disguise for the party to have been voted out of power in 2016.
According to John Mahama, the NDC had to be voted out of power for Ghanaians to appreciate the good works they had done for them.

He has vowed to wrestle power from the hands of the NPP come 2020.