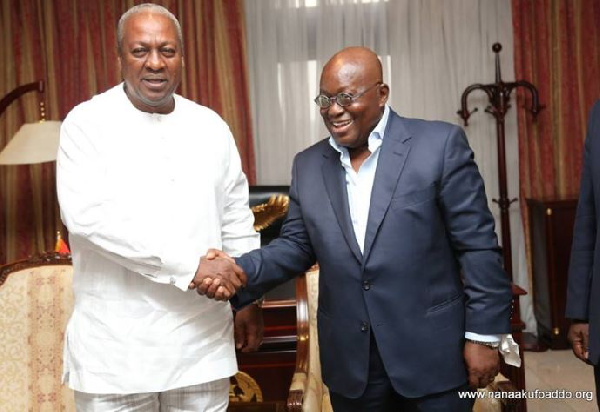 He said education remained the key to opening up societies for rapid development and praised the government highly for finishing construction works on the project started by the Mahama administration to make secondary education accessible to people in the catchment area.

Former President Mahama said this in an address delivered on his behalf by Mr. Kwame Agbodza, Member of Parliament for Adaklu at the first Goeviwo festival durbar at Adaklu Goefe in the Volta Region.

The festival, which was on the theme "reuniting Goeviwo for development" brought together five communities, said to be descendants of one Togbe Goe who after their migration from Notsie in the Republic of Togo settled at different locations in the Volta Region.

Former President Mahama asked the people to use the festival to showcase their rich culture and also for development.

Dr. Archibald Yao Letsa, Volta Regional Minister asked the people to live in unity because it was a prerequisite for any meaningful development.

He also asked them to rally behind the government saying "the government will not leave the people of Adaklu out of its development plan."

Mr Phanuel Kadey Donkor, Adaklu District Chief Executive said government secured funds for extension of potable water to the District and that a contractor was working on the road from Waya, the District capital to Tsriefe, which would be tarred.

Mr Matthew Wormenor, Chairman of the interim planning committee said the festival would be rotational and said funds raised would be released to the host community for its development projects.

Togbe Dzegblade IV, Chief of Adaklu Kodzobi who chaired the function appealed to all descendant communities to come on board because their strength and development was in unity.

Mr Agbodza also donated GHC1, 000 and 20 bundles of roofing sheets in support of a community centre put up at Adaklu Goefe.

Dr Letsa and Mr. Donkor also donated 100 and 50 bags of cement each towards the project.