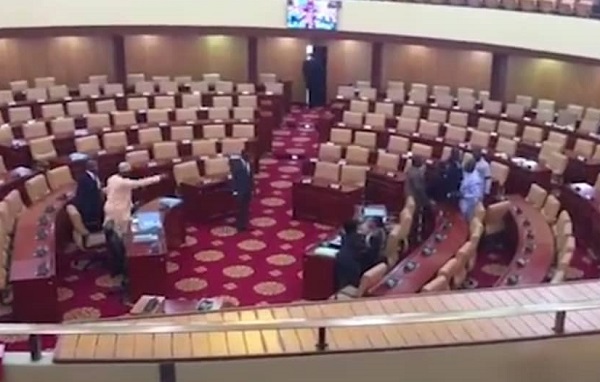 The Minority in Parliament has walked out of the chamber today March 23, 2020.

This action came about after Muntaka Mubarak who is the Minority Chief Whip virtually interupted proceedings on the floor.

He said he had been trying to catch the Speaker Prof. Mike Ocquaye's attention for a while but the Speaker had not recognized him.

As conversations were ongoing on the Corporate Insolvency Bill Muntaka interupted and told the Speaker he was drawing his attention to the fact that they did not have enough numbers on the floor to undertake business.

He then said the Speaker's action to allow continues proceedings amounted to lawlessness and to a certain extent shameful and they the Minority are not happy about.

So when he was done he walked out of the Chamber and a few minutes later other Minority MPs also followed suit.

As at the time he made those comments there were about 60 members but the number reduced to 30 after the other Minority members walked out.

Meanwhile, the Majority Leader Osei Kyei Mensah Bonsu has described the Minority's act as shameful and the walkout should not have happened.

Programmes Manager for Parliamentary Network Africa, Gilbert Boyefio last month said there is a possibility of more walkouts by Members of Parliament this electioneering year.

According to him, Members of Parliament are taking entrenched positions on issues which is affecting Ghana's democracy. He added that MPs are not ready to come to a consensus and agree on issues debated in Parliament.