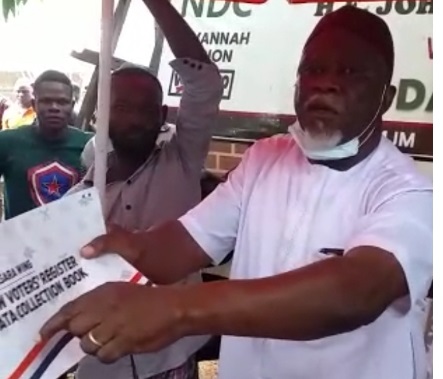 The National Democratic Congress (NDC) has quashed reports that their national vice-chair Chief Sofo Azoka has been invited by the Savannah Police over his 'finish him' comment.

There were reports that the NPP had reported him to the police over the comments but that has now been denied by the NDC Communication Director in the Savannah Region Malik Basinteli.

"No one has invited Chief Azoka formerly, he has not been invited by the police. The reports going round is false, the NPP says they have reported the case but no one has invited him. His statements were very clear, he was not inciting anybody. There is a clear difference between finish him and kill him. I am surprised people from the NPP are attempting to tarnish the image of Chief Azoka. When Akufo-Addo wanted to plunge Ghana into chaos he said "All die be die", he told Joy News.

The Savannah Police have confirmed that Mr Azoka has been reported by the NPP but they are yet to invite him officially.

This brouhaha follows threat issues by Mr Azoka when he toured Savannah Region.

In the video, Chairman Azoka was heard shouting and charging supporters of NDC to finished anyone with the booklet going round communities.

Mr Azoka claims the NPP is using the Booklet to collect information of registered Ghanaians and looking at disenfranchising them.

The unhappy chairman Azoka charged NDC members to ” if you see anyone in your community holiday this book, going round and writing our people names masa don’t let him go free; This book if you see him to do what, finish am, they are not electoral commission” Azoka fumed.

He repeated; if you see anyone going round collecting people voter ID card to do what! finish them.

The NPP claims the book was a data collection book for Zongo communities has nothing to do with information of citizens with voter ID cards.