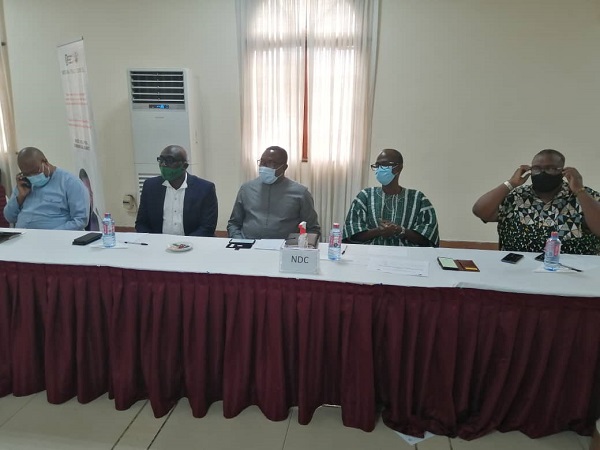 The National Democratic Congress (NDC) has finally signed the final roadmap to ending political vigilantism in the country.

The NDC for months had refused to sign the document saying it was a very premature move because some outstanding issues had not been addressed.

The party even though have assented to the document cited a number of concerns including government's failure to reprimand persons indicted in the Emile Short Commission report and the alleged recruitment of NPP thugs into security agencies.

Chairman of the NDC Samuel Ofosu Ampofo who led them to sign the document said they are doing so because they respect rule of law and want a peaceful election.

The Chairman of the Peace Council Rev. Emmanuel Asante expressed excitement about the NDC's decision to finally sign the document but assured them that they will resolve all the reservations they have raised.

The NPP was present but had no reservations about the document.

General Secretary of the party, John Boadu who signed it in February said the timing is right and with a law banning the activities of political vigilantism, the document will serve as a good reference point for them.

The political vigilantism dialogue was instituted by the National Peace Council following the violence that marred the Ayawaso West Wuogon Constituency by-election in 2019.

Despite earlier disagreements, the NPP and NDC committed to the dialogue and indicated their preparedness to end the menace.

The dialogue was meant to focus on examining the draft roadmap and code of conduct prepared by the Technical Committee as part of steps to tackle the menace.

The 31-page road map has what the parties need to do in the short, medium and long term to eradicate political vigilantism from Ghana’s political dispensation.