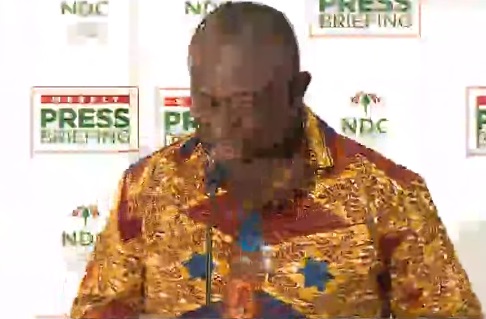 The NDC has given the government up to Tuesday, June 30 to withdraw the military deployment from the Volta Region.

MP for Ho West Emmanuel Kwasi Bedzrah speaking at the party's press briefing at Aflao in the Volta Region said they will take action is the military is not withdrawn from the region.

According to him, they will not reveal their plan B but it will kick if the government did not withdraw the military.

MP for Ketu South, Fifi Fiavi Kwetey says government’s official explanation on the deployment of the military in Volta Region is ridiculous and laughable.
According to him, the said explanation cannot be true because Ghana’s Covid-19 cases are more than its neighbouring countries.

The Volta Regional Minister Archibald Letsa said the deployment is mainly to enforce the border closure by the President.

He stated that the deployment has nothing to do with the new voters’ registration exercise but rather to make sure foreigners do not enter the country. This will help to stem the spread of Covid-19 in the country.

But speaking on the explanation, Fifi Kwetey said Togo should rather be the one preventing Ghanaians from entering their country because our cases have passed that of Togo.

Fifi Kwetey noted that the exercise by the government is to intimidate party members of the NDC from registering for the new voter ID.