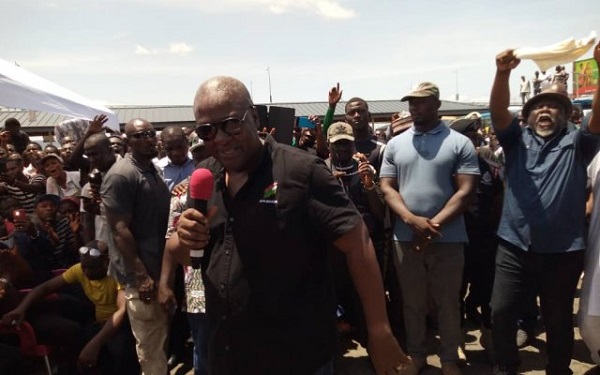 The National Democratic Congress (NDC) has launched one of their campaign strategies for the 2020 elections dubbed “2020 door-to-door campaign for John Dramani Mahama”.

The launch was held in the Dome-Kwabenya Constituency in the Greater Accra Region with a call on party executives to work hard to help wrestle power from the ruling New Patriotic Party (NPP).

The door-to-door campaign formed part of the party’s implementation of the Prof. Kwesi Botchwey Committee’s report, and also to ensure unity and cohesion at the grassroots level as recommended by the committee ahead of the 2020 general election.

The main aim of the door to door campaign is to ensure that every electorate becomes aware of and fully understands the policies of the NDC, ahead of the 2020 general election.

National Organiser of the party, Mr. Joshua Akamba speaking at the launch advised the party leaders to pay particular attention to members at the grassroots in order to attract more supporters to the NDC.

He added that the new strategy would help the party to strengthen its effort towards winning more parliamentary seats and garnering more votes for the Presidential Candidate of the party.

The launch saw most NDC polling station and constituency executives, the aspiring parliamentary candidate for the Dome-Kwabenya Constituency, Mrs. Elikplim Akuru, and some party gurus who claimed it was meant to strategise towards the general elections in 2020.

Mr. Akamba also called on party supporters and sympathisers to unite so that the task of wresting power from the ruling NPP would be easy, saying, “our party is not only focused at the level”.

He said: “I want to call on the old executives who lost their positions to join hands with us so that all of us can present a united front in capturing power from the NPP.”

Former President John Mahama suffered the worst possible electoral defeat, the first ever for any sitting President under the Fourth Republic, in the 2016 general elections. He managed to poll 44.40 percent as against Nana Addo Dankwa Akufo-Addo’s 53.85 percent.