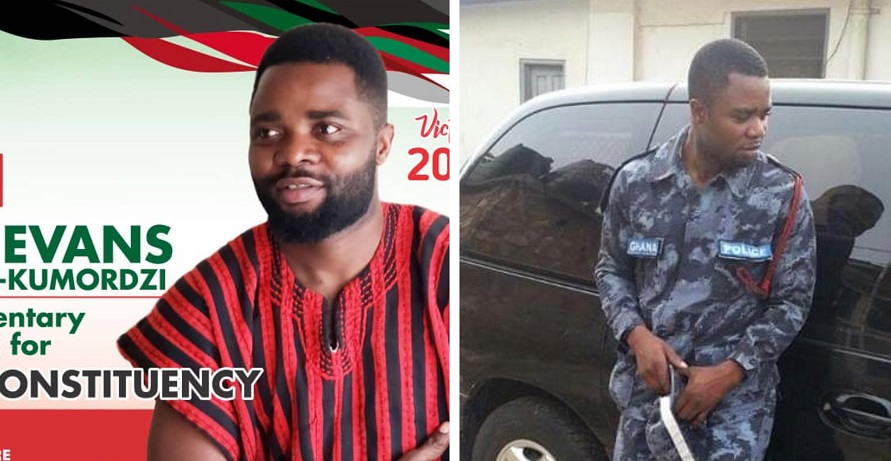 Another police officer aged 35, Detective Corporal John Evans Ayerakwa-Kumordzi with the Akropong District Command has resigned from the Ghana Police Service and picked nomination form to contest the upcoming Parliamentary Primaries of the opposition National Democratic Congress (NDC) in Okere constituency of the Eastern Region.

This latest development follows few days after the executive secretary to the Inspector General of Police, Superintendent Peter Lanchene Tuubo retired voluntarily from the service to contest the Wa West Parliamentary primaries of the NDC.

Speaking to Starr FM, Detective Corporal John Evans Ayerakwa-Kumordzi said he tendered in his resignation letter to the IGP, David Asante-Apeatu, in accordance with the Police Service Act in February this year which was accepted giving him the momentum to pursue his political ambition of serving his people in Okere constituency.

“I have been in the Police Service for eleven years. I joined the Police service in 2008 but I resigned in February this year. Right after the Police Academy, I was posted into my constituency so I have worked here for 11 good years. I have been with the people for the past 11 years because I was a Detective. So I have been with the people for a very long time and I know their challenges, so I think this is the right time for me to lead the constituency to help them have better living condition''.

The former Police officer was part of three other Parliamentary hopefuls who have picked the nomination forms with the intention to contest the Primaries in the constituency.

Corporal John Ayerawa-Kumordzi, a former CID operative is hopeful of winning the primaries and subsequently recapture the Okere Constituency seat which was a stronghold of the NDC in 1992 until 2001 when the ruling New Patriotic Party won and occupies till date with the incumbent Member of Parliament Dan Kwaku Botwe.