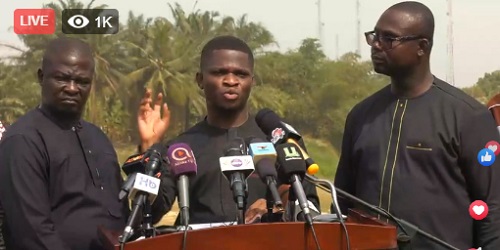 The National Democratic Congress, NDC has served notice that they will petition the UN Secretary-General António Guterres to revoke the appointment of President Akufo-Addo as co-chair for the SDGs Advocates.

The NDC at a press conference at the banks of River Pra said President Akufo-Addo has failed to address the very issue of galamsey he has put his office on the line for.

Addressing the media, Communications Officer for the party Sammy Gyamfi said the petition will be ready by Tuesday, February 18, 2020.

"The NDC hereby served notice that in the coming days we shall petition the UN Secretary-General António Guterres to revoke the appointment of President Akufo-Addo as co-chair of the SDGs advocates."

According to Sammy Gyamfi, the role of the President as a co-chair of the SDGs Advocates required him to protect the water bodies and the environment.

But the President from the various issues of alleged missing excavators and NPP members being given concessions for illegal mining when there was a ban on small scale mining show that he is unfit for the role.

"That petition will be ready by Tuesday because President has failed to show genuine commitment to the fight against illegal mining and the protection of the environment in his own backyard, his corrupt government has become an active enabler and promoter of galamsey and destruction of the environment in a way that affronts the Sustainable Development Goals of the United Nations, he is a bad example not worthy for emulation and he has proven to be unfit for the prestigious position of a co-chair of the SDGs advocates for this reason he must be removed without delay.."