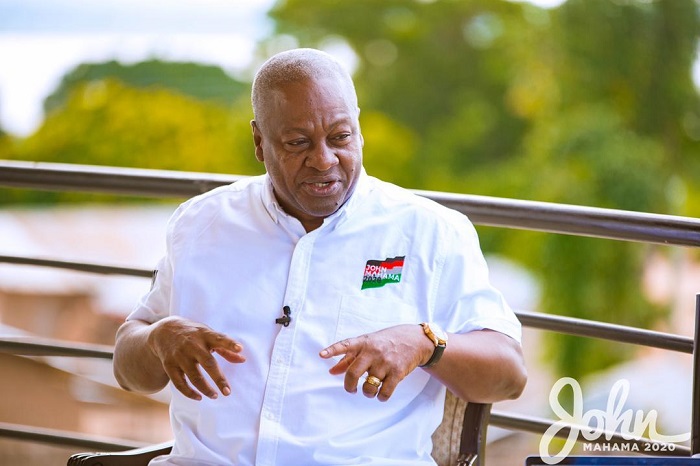 The presidential candidate for the National Democratic Congress (NDC), John Dramani Mahama, has given yet another clear indication that he will not respect the Agyapa mineral royalties agreement should he be elected president of Ghana in the December 2020 polls.

The former President says the NDC will legitimately frustrate the deal to make sure it is not signed.

He has therefore urged the Akufo-Addo-led government to desist from signing that deal.

Addressing the chiefs and people of Kaleo as part of his tour of the Upper West Region, the former President said the deal is not in the interest of Ghanaians and they will fight to stop it.

"Recently NPP took something from Parliament which is the Ghana Gold and said we were also trying to monetise gold, the difference is that the proposed Ghana Gold company was 100% owned by the government and people of Ghana, not Agyapa. With Agyapa Ghana owns only 51%, 49% is held by other people we don't know. They should desist immediately from signing that Agyapa deal, we are going to oppose it. We will oppose the agreement and do everything legitimately in our power to frustrate that agreement in the interest of the people of Ghana"

Mr. Mahama pointed out that the Agyapa deal which is shrouded in secrecy and its beneficial owners are unknown, seeks to “monetise Ghana’s gold royalties for the next 15 years and even in perpetuity without the consent of the people of Ghana”.

He added that “civil society and right-thinking Ghanaians have all expressed misgivings about this Agyapa deal”.

He said the government should back down from signing that deal because “we will do everything legitimately in our power to oppose the agreement and make sure it doesn’t happen”.

Mr. Mahama said a small group of people cannot arrogate to themselves the right to monetise the country’s gold royalties without building consensus with the chiefs and people, adding the Agyapa agreement does not serve Ghana’s national interest.