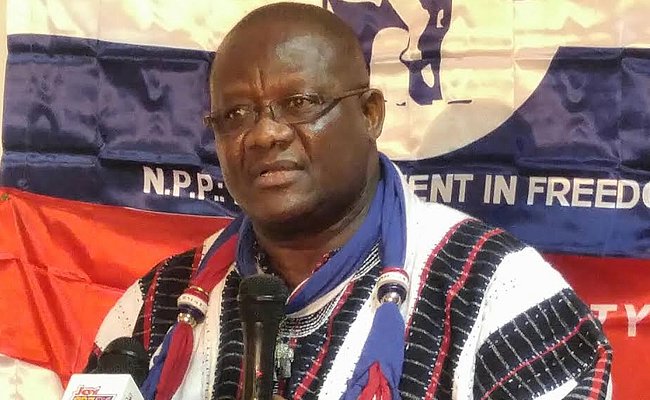 Suspended National Chairman of the New Patriotic Party (NPP) Paul Afoko supported the NPP to ensure that the party won the presidential and parliamentary elections in the just-ended December 7 poll, his spokesperson has stated.

According to the spokesperson Nana Yaw Osei, quite a number of the party’s parliamentary candidates sought the support of Mr Afoko, which he offered them enthusiastically, and therefore the victory of the NPP could not have been written without Mr Afoko’s help.

Days after the NPP, led by Nana Addo were declared victorious in the December polls, a leading member of the NPP, George Ayisi Boateng, counselled Mr Afoko and Kwabena Agyapong who were suspended from the party last year to show remorse in order to be called back to post.

However, speaking on Class 91.3FM, Nana Yaw Osei said: “If anybody should say that the victory of the NPP in the December 7 presidential and parliamentary elections was without the contribution of Mr Paul Afoko, then that person obviously doesn’t know what he is talking about”.

According to him,“[Mr Afoko] supported the campaign and some parliamentary candidates came to him for help. I need not mention their names, and so support for the campaign came in different forms from different people.

“So, let me say that if anybody should come out there to state that the victory came without [the involvement of] Mr Afoko, then that person doesn’t know what he is talking about. There are a lot of people who helped the party but do not boast about it, thousands of people offered help”, he added.

The National Chairman Paul Afoko and General Secretary Kwabena Agyepong who are executives of the NPP were suspended by the National Executive Committee (NEC) of the NPP for allegedly working against the interest of the party ahead of the just ended 2016 elections.

Mr. Afoko disregarded the decision of the National Executive Committee (NEC) against him and subsequently filed a suit against the party at an Accra High Court. However, the court sustained his suspension by the leadership of the NPP.