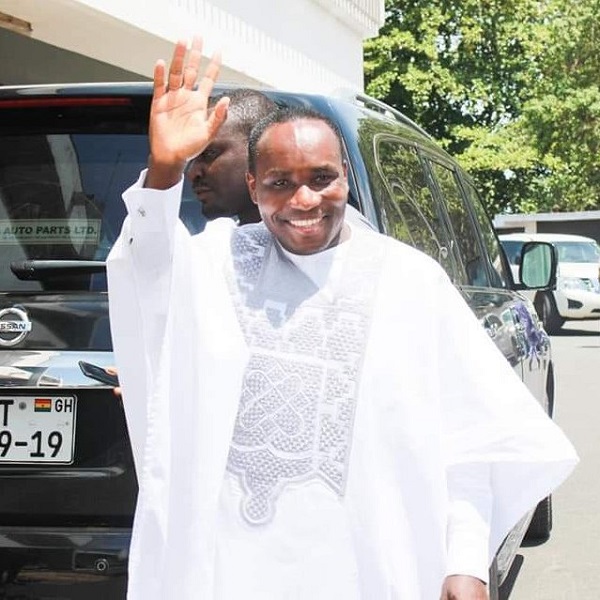 Some New Patriotic Party (NPP) youth have petitioned the Chief of Staff and the Minister for Local Government, Rural Development and Decentralization to relieve Chief Executive of Ellembelle District, Kwasi Bonzoh of his post.

Some polling station executives as well as electoral area coordinators who joined in the petition claim his “behaviour has constantly put NPP in Ellembelle into public ridicule and sank the party beyond salvage”.

They mentioned Mr. Bonzoh's participation in galamsey activities, incitement of "unnecessary" protests and assaults on party officials, as well as insufficient projects in the District despite the presence of several businesses, as their "offenses."

Additionally, the petition demanded that an immediate investigation of his actions, particularly with reference to domestically produced monies, be conducted (IGFs).

“We are also by this petition inviting the Local Government and Rural Development Ministry to take interest in this matter and initiate detailed investigations to salvage the image of the NPP Party and the Government at large.

“We are aware that Hon. Bonzoh has repeatedly boasted about his relationship with the President and we quote ‘I am the darling boy of the president, all DCE’s in Ghana can be sacked but not me. The president still nominated me when I was excluded from the vetting committee’s list to him’.

“But for the betterment of the constituency and to curtail endless disunity in the party, we strongly believe it is about time the President acted on such unscrupulous behaviour of Hon. Kwasi Bonzoh and save the party from total collapse in the constituency.”

Below is the full petition…

We, the Concerned NPP Youth/ Concerned Polling Station Executives and Concerned Electoral Area Coordinators, petition your good office to relieve the DCE of Ellembelle, Hon. Kwasi Bonzoh from office with immediate effect to save the image of the party and the District from further dwindling.

We have wholeheartedly supported Hon. Kwasi Bonzoh ever since his appointment as District Chief Executive of Ellembelle in 2017 till date with the sole motive of ensuring development of the district and bringing absolute peace to the party so as to wrestle the seat from the NDC party.

On the contrary, the repeated transgressions of the Hon. Kwasi Bonzoh, is now a threat to Ellembelle and inimical to the survival of the party.

Your Excellency the President of the Republic of Ghana, we hope you are privy to the series of petitions written to your office by the former executives highlighting the gross misconduct of the Hon. DCE which among them has to do with his nonsupport of party activities, persistent creation of division in the party, his involvement in galamsey activities, just to mention but a few.

As if those are not enough, his recent conduct has iretrate  our  call for his immediate dismissal.

His behaviour has constantly put NPP in Ellembelle  into public ridicule and sank the party beyond salvage. Some of the reasons are as follows:

We can authoritatively say that our DCE, Hon Kwasi Bonzoh is neck deep in the galamsey activities which have destroyed some water bodies in the district, something your government is trying so hard to fight. This is a public knowledge as some of the galamsey kingpins are living under his roof.

One cannot fathom why as the head of the District Security Council and with all the political powers will allow galamsey activities to flourish day and night for months at a distance less than half Km from his office.

Most major stakeholders including traditional authorities in the district were extremely perturbed when her Ladyship, Mrs. Awo Amissah was transferred from the district all because she admitted to an open secret that the substantial noise of the galamseyers at the back of her residence gives her sleepless night and that she had to move from her official resident. Due to this, the district has no magistrate as of now.

His attempt to cover up led to the interdiction of the then Divisional Police Commander, ACP Dodzi Hlordz, and the transfer of some assembly staff who fiercely protested against his involvement in the galamsey activities at the back of their residence. This has seriously dented the reputation of the party in the district.

As ardent members of the party, we cannot sit aloof for Hon Kwasi Bonzoh to send the party to the slaughter House for his personal against.

His purported media war against galamsey is known by the grassroots of the party and most opinion leaders in the district as cosmetic and face saving exercise to cover up his guilt.

Therefore, we are appealing to you. as a matter of urgency to act accordingly to redeem our party.

Ellembelle NPP has neither known nor enjoyed peace ever since Hon. Kwasi Bonzoh became the DCE. He always engaged in acts that in one way or the other creates division and this continues to thicken by the day. Attacks and insults on party leaders have been the norm. He always instigates his boys to insult prominent party leaders within the Party who can help win the seat from the NDC. The regional chairman and the former national chairman have all been victims.

He organized an unwarranted demonstration in 2017 and bused innocent people from the constituency to the party head office, Accra to demonstrate over frivolous allegations which could have been resolved peacefully in the constituency.

Mr. President, Ellembelle was one of the peaceful constituencies in the country until Hon. Kwasi Bonzoh became the DCE, that every polling station election were always characterized by immense violence and brutality all in the name of winning parliamentary primaries.

Our call for his immediate removal essentially hinges on the recent attack, Hon. Bonzoh masterminded which could have resulted in civil unrest and an attack on Ghana Gas Processing Plant at Atuabo all because he wanted to be appointed as deputy CEO at the company. If the police had not intervened and caused the immediate arrest of some of the boys who publicly declared they were going to burn down the Gas Processing Plant at Atuabo, it could have been a sad day for Ghana.  This selfish and unpatriotic attitude is not deserving of a DCE.

Despite the police arrest, Hon. Bonzoh also instigated another set of the youth of which some of them lives under the same roof with him to demonstrate at a durbar held to climax the Kundum festival of Eastern Nzema Traditional Council, Atuabo despite previous engagement with the Board Chair of Ghana Gas, Hon Kennedy Agyapong who happens to be the guest of honor of the ceremony.

This is a blatant disrespect for traditional authorities because this durbar brought together all the chiefs in the district to climax the Kumdum festival.

The party again was in the bad news and ridiculed for something Hon. Kennedy Agyapong tried his best to avoid but the DCE refused. Hon. Bonzoh has to be removed immediately to avert doom for NPP and Ghana.

Ellembelle District is fortunate to have been surrounded by a good number of companies that pays property rate and business operating permit regularly to the District Assembly. Among these major companies are Quantum PLC, Adamus Resource LTD, ENI Ghana, and Ghana Gas Company Ltd.

It is therefore expected that the District Assembly will have substantial funds to undertake a lot of IGF Projects in the District to enhance the party fortunes of winning the 2024 elections.

It was recently established that Ghana Gas alone has paid close to 8 million Ghana Cedis as property rate and business operating permit to the District Assembly since 2017. It is also rumored that Quantum PLC, Adamus resource LTD, and ENI Ghana have also paid substantial amount on the same premises to the Assembly for the past six years.

Despite all these internally Generated Funds very little has been seen as IGF projects in the District.

The party can only boast of CODA projects and a few Common Fund Projects as an achievement.

Party communicators have consulted the DCE on several occasions to at least outline some projects or activities being carried out by IGF from these companies since a lot of pressure groups, traditional authorities, and the opposition parties are calling for accountability but all falling in deaf ears. There is virtually nothing to show from these huge sums of money paid to the assembly.

What has exacerbated the situation is the recent details provided by Ghana Gas Company on actual payments made to the Ellembele district assembly.

This was occurstrated by  accusations levelled against Ghana Gas for not contributing to the development of the district .

Moreover, our independent checks from the companies mentioned above suggest that a lot of monies have been paid to the District Assembly.

The impending agitations from pressure groups, traditional authorities and the opposition parties are too immersed and affecting the image of the party in the district.

We are of the view that these huge funds could have been used properly to enhance the chances of the party to annex the parliamentary seat in the next election but unfortunately that is not the case in Ellembelle.

We therefore call for the immediate removal of Hon. Bonzoh as the DCE   to save the party from going into the abiss.

Again, we call for independent audit to be carried out since your government detests the misapplication of public funds.

We are also by this petition inviting the Local Government and Rural Development Ministry to take interest in this matter and initiate detailed investigations to salvage the image of the NPP Party and the Government at large.

We are aware that Hon. Bonzoh has repeatedly boasted about his relationship with the President and we quote “I am the darling boy of the president, all DCE’s in Ghana can be sacked but not me. The president still nominated me when I was excluded from the vetting committee’s list to him”.

But for the betterment of the constituency and to curtail endless disunity in the party, we strongly believe it is about time the President acted on such unscrupulous behaviour of Hon. Kwasi Bonzoh and save the party from total collapse in the constituency.