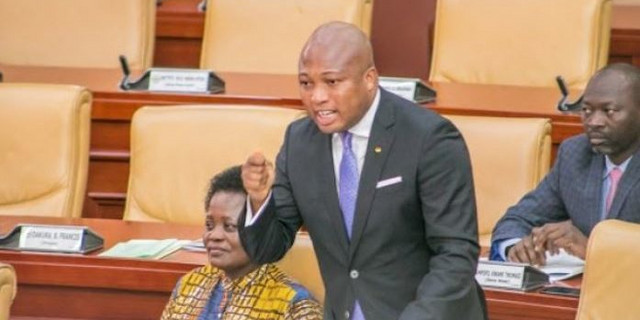 The Ranking Member of the Foreign Affairs Committee, Samuel Okudzeto Ablakwa has filed an urgent question in Parliament demanding that the government explains why President Akufo-Addo did not use the presidential aircraft for a recent trip to France.

According to the North Tongu Member of Parliament (MP), "It is an outrage and a blatant betrayal for Ghana to own a presidential aircraft in perfect working condition" and charter aircraft for Presidential travel.

He also estimated that the President's trip cost in excess of two million Ghana cedis.

"Letâ€™s further analyse President Akufo-Addoâ€™s latest trip to Europe: per Flightradar24, the G-KELT aircraft left Accra with the President to Paris on the 16th of May â€” a 6 and half hour duration. Airlifted the President from Paris to Johannesburg for 11 hours on the 23rd of May. Then Johannesburg to Accra on the 25th of May was a five and half hour flight. This gives us an accumulated flight travel of 23 hours; so at Â£15,000 an hour, it thus cost us a colossal Â£345,000. At current exchange, that is a staggering GHS2,828,432.80," the MP wrote in a Facebook post.

"Aviation experts inform me it would have cost Ghana less than 15% of this 2.8million Ghana Cedis had President Akufo-Addo opted for Ghanaâ€™s available presidential jet which is in pristine condition. Alternatively, far more affordable travel arrangements are available which could have aligned with the Presidentâ€™s rhetoric for sympathy from the west for African nations.

"The irony is that President Akufo-Addo engaged in this fantastic extravagance on his way to France to go beg President Emmanuel Macron for debt cancellation. Needless to add that President Macron does not travel in such splendour".