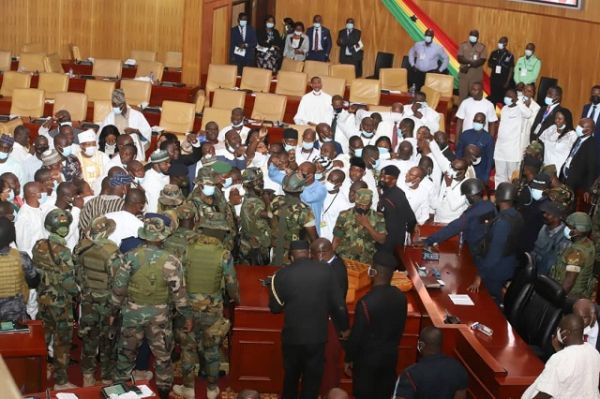 Member of Parliament for Ningo Prampram Sam Nartey George has revealed that Defence Minister Dominic Nitiwul kept threatening the Minority side with the presence of the military.

Some security personnel numbering about 20 on Thursday stormed Parliament following several commotions recorded in the Parliament during the inauguration processes for the 8th parliament commenced.

Sam George speaking on TV3's Key Points programme on January 9, 2021, said Mr Nitiwul who he described as a former Defence Minister, kept telling the NDC side of the House that if they did not behave well, he was going to order the Military to come in.

READ ALSO: The military must be queried about why they stormed parliament- ACEPA

"Whiles we were in the House the former Minister of Defence Dominic Nitiwul kept on telling us that if we did not behave ourselves he was going to bring in the military and we kept telling him he had no power to do so.”

The action of the military have been condemned and Executive Director for African Centre for Parliamentary Affairs, ACEPA Dr Rasheed Draman says there is a need for the military hierarchy to be questioned about why the stormed parliament on Thursday.

Dr Rasheed Draman stated that there must be a serious action taken against the action of the military.